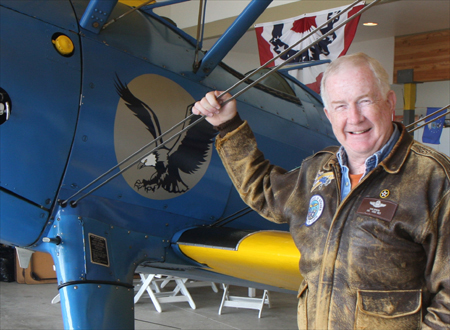 There is a saying that if you love what you do, you will never work a day in your life.

Spayd, who has more than 30 years of experience flying everything from Air Force planes to Boeing 747s, in retirement is sharing his love of flying with visitors to the Oregon Coast.

Based out of the airfield in Florence, Spayd offers a unique way to see the dunes, coast and lighthouses on the southern Oregon coast.

“The best part of this job is when we get back and some of the reactions of people who have taken a ride,” Spayd said sitting in his hangar. “People jump up and down and have huge smiles on their faces, it’s a good feeling to know that I was able to share something that made them so happy.”

Spayd’s plane is an open-cockpit 1944 Stearman “Kaydet” that was use for training U.S. Army Air Corps and the U.S. Navy before and during World War II. The bi-plane has a large radial engine (nine cylinders) and Spayd has owned it since 1995. He even has a friend who specializes in the aircraft come and keep the plane maintained.

“This plane is built like a tank,” he said. “It is very reliable and tough airplane. It was built to be durable.”

He has been offering flights for more than seven years and takes people at 500-feet over the beach, past the Sea Lion Caves and to the Heceta Head lighthouse.

“It’s an amazing trip because from the air you can see all the way through the caves and really get a glimpse of wildlife and the coast from the air,” he said.

While the plane could do acrobatics, Spayd says he doesn’t have the parachutes to be certified to do stunts, so don’t expect any upside down, barrel rolls or other tricks.

“I can do some wing overs, but that’s about it,” he said. “I always try to judge how comfortable a person is with flying before we do anything they wouldn’t like.”

Spayd also said that many people don’t know that there are 17 fresh water lakes around the Florence area, and he will take his co-pilots on a tour on the way back from visiting the lighthouse.

While the lighthouse trip is by far the most popular trip he has, he also offers flights to where ever you want to go on the coast that is within range of the plane. He calls it the “Just Flying” package and visitors can see other lighthouses and cities and attractions in the area from the air.

Spayd flies the plane from the back seat – the traditional spot of the main pilot in bi-planes – and he can only take one passenger up at a time. There is an intercom in the airplane and during the roughly 20 minute flight, he tells people about the history of the area. He also points out wildlife areas and even will show people where the dune buggies are running around in the dunes during longer flights.

“I have had some people who don’t want to go up, but their friends do,” Spayd said. “When the friends get back and start talking about it, normally they are back to get a ride of their own.”

For fun when Spayd gets back to Florence he lands in the grass to give people a different feel of what it’s like to land in a bi-plane.

“It’s a great job and I just love sharing this experience with other people,” he said.

About the Aero Legends: T.F. “Sam” Spayd offers 20 minute to 1 hour flights around the Central Oregon Coast in a 1944 Steerman bi-plane. Spayd is a 30-year veteran of flying in both the Air Force and commercially. He offers flights up and down the coast, depending on what you want to see and is based out of the Florence Municipal Airport.

What to bring: Warm clothing, even in the summertime is recommended, this is an open-cockpit aircraft so it can get chilly. In addition make sure to bring your camera along, because you will be some unique views of Central Oregon Coast attractions.

Tip: Spayd likes taking people up in the morning hours before the wind gets howling. “In the morning the ride isn’t as bumpy and people seem to enjoy themselves more,” he said.

Season: Spayd will go up as the weather allows, but September and October are usually the best months for weather for that part of the Oregon coast.

Getting there: Spayd’s hangar is based at the Florence Municipal Airport on Airport Way in Florence, Oregon. Off the highway a few blocks, the small airfield is easy to find, just follow the signs off Highway 101 when you get into town.