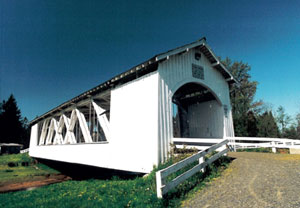 Background:
The Weddle Covered Bridge is a typical example of Linn County’s open-sided covered bridges. Many Linn County residents believed that this bridge was lost forever when it was yanked apart by workers in October 1987. The bridge had spanned Thomas Creek for 50 years.

It was bypassed in 1980 by a concrete bridge downstream, and neglected. The deteriorated bridge eventually became a safety issue, and the span was scheduled to be demolished.

This action sparked protests by local covered bridge enthusiasts. As the story goes, one person chained himself to a bulldozer to prevent the bridge’s demise.

The Weddle Bridge became the first covered bridge project to receive grants under that program. In 1989, a Sweet Home group known as the Cascade Forest Resource Center was formed to rebuild the Weddle Bridge across Ames Creek in Sankey Park.

Much of the planning to rebuild the bridge was done with assistance from the Jordan Bridge Company, the group which rebuilt the Jordan Bridge in Stayton. Additional fundraising was inspired by the Jordan group and the Covered Bridge Society of Oregon.

Because of this grass-roots funding effort, coupled with community dedication, the Weddle Bridge restoration became a big success.

In addition to the historic value, the bridge is the site for weddings and community events and now stands as an example of what can be done to preserve Oregon’s covered bridges.