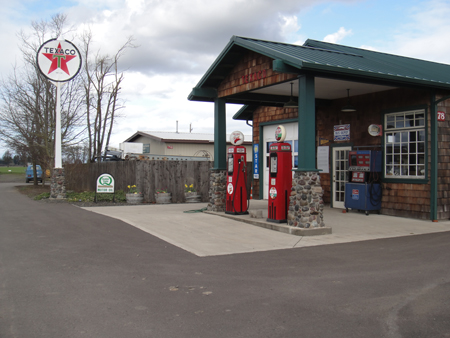 For any over testosteroned, red-blooded American male, any place called “powerland” has got to be heaven.

Add in some history and learning, and well, it’s a place that is great for a family stop or a day of exploring.

The best part of Antique Powerland is that there is a lot of variety in what you can see. In fact there are more than 15 different museums and societies all with some connection to horsepower or transportation. If looking at the history of bulldozers and crawlers of Caterpillar isn’t enough, then one building over there is the Northwest Vintage Car and Motorcycle Museum where you can see and learn about old cars and motorcycles. There are many aspects of the last 150 years of Oregon industry covered at the site near Brooks along Interstate 5.

“We really do have a lot of different items that people can look at and learn about,” said Al Hall, the group’s marketing manager and board member. “Antique Powerland is the umbrella organization and then other groups buy in to have space on the property and be a part of the organization.”

What you get is a mix of groups that focus on everything from farm equipment, to large static engines, to trucks and even trolleys. While some groups have buildings up and exhibits that are open to the public every weekend during the spring and summer months, others are still fundraising and constructing buildings.

When you visit you get to meet people like Don Leffler, president of the Caterpillar Museum, who you will find turning the hand crank to start an old Cat “twenty eight.”
Antique Power Land“The numbers on the front of the old Cats refer to their horsepower,” Leffler said, while shouting over the loud Cat as it moved into the museum. “The smallest model produced was the ten in 1929, it had about 15 horsepower.”

Leffler’s group has close to 40 different makes and models of the crawlers and bulldozers in his metal building and workshop on the Powerland site.

Just down the roadway that runs around the Powerland property is the Oregon Electric Railroad Museum, where Bill Binns has a huge building filled with railcars, trolleys and electric streetcars that have historical significance.

“We have a lot of stuff in here that we are always working on, and love to give tours,” Binns said as he showed off a 1912 Australian streetcar. “There are a lot of people here who love the history of railroads and we want to preserve some of that to show and educate the younger generation.”

Hall says that is the over-riding goal of the historic consortium, to educate and show people that engines, equipment and vehicles from the bygone era were built to last – with many of the exhibits still in running condition no matter how old they are.

“Where we really shine is during our events,” Hall says. “That’s when everyone is out here showing what they have and talking to people about the history of the different forms of transportation or engines or history. They are always great events.”

When you visit Antique Powerland the one amazing fact to keep in mind, is that the entire 62 acre site is managed by volunteers – there isn’t a paid manager or coordinator keeping the museum running.

To capture the full potential of Antique Powerland all you have to do is visit during its annual “Great Oregon Steam-Up” event during the last weekend in July and the first weekend in August. During the event thousands of people show up to buy at the swap meet, see antique tractors pull sleds and learn about the history of any number of industries that required, well, power.

Antique Powerland Museum is a consortium of more than 15 museums and groups on a 62 acre site south of Portland along Interstate 5 that are focused on the history of industry and horsepower. It is known for its annual “Steam-Up” event that occurs each summer. Each of the museums in the group is in charge of building and manning their own sites, and the entire operation is done with volunteer labor.

What to bring: Visiting Antique Powerland can take as long, or as short as you would like. A quick trip can be two hours long, or you can take all day and see everything from the blacksmith shop to the new John Deere museum going up. It is a large site with a lot of walking between museums, so make sure to bring comfortable shoes and weather appropriate clothing. Photographs are allowed on the site, so charge up those cameras.

Season: The Antique Powerland site is open from March 1 through October 1, but things are very busy during the summer months with swap meets. The big event that you won’t want to miss if you are a fan of crawlers and tractors is the “Great Oregon Steam-Up” during the last weekend in July and the first weekend in August.

Getting there: Antique Powerland is one half mile west of Interstate 5 off of the Brooks exit number 263.

History: The forerunner to Antique Powerland was annual threshing bees held on farms in the Silverton and Woodburn areas in the 1950’s and ‘60’s. Each fall, local farmers would get together for a weekend to test “the mettle” of their farm tractors and show off heritage apparatus.

The public was attracted to these events and attendance rapidly grew. To accommodate the growth, a 62 acre parcel of farm land was acquired in Brooks, Oregon. Western Antique Powerland, Inc. was set up and its annual event became known as the “The Great Oregon Steam-Up”.

In the beginning, the Show was primarily steam apparatus, farm tractors, implements and stationary gas engines. Only a small portion of the property was used for the event, the remainder was being farmed. However change was destined to take place!

In 1988, when a site was needed for a proposed heritage truck museum in the Northwest, Powerland became the location of choice. Oregon Electric Railway Historical Society followed in 1996, and the Antique Powerland Museum of today was launched.

Planned additions for 2009 and ensuing years include a Branch 15 Wolf Iron Works shop, an Oregon Electric Railroad Interpretative building, conversion of the Richardson building to a heritage architecture and inclusion of the Mt. Hood diesel-generator set and a vintage machine shop, a traction engine building, and a heritage wood working shop. The Two Cylinder (John Deere) group continues to raise funds for a planned museum structure.