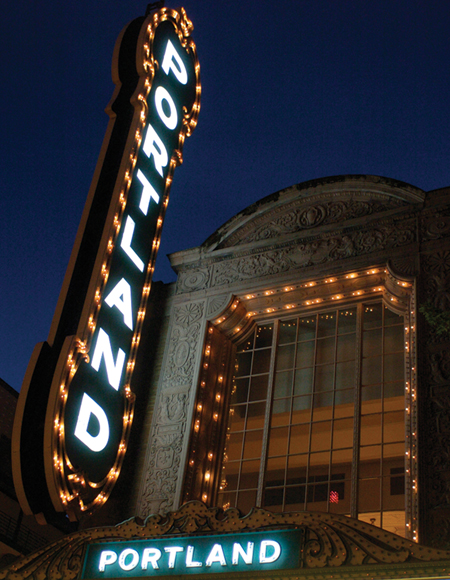 It has been known by three names, has been the site of at least one documented gun fight, and to this day attracts the rich and the poor alike.

It’s the Arlene Schnitzer Concert Hall, and its history is as rich as the sound from the main stage when the Oregon Symphony holds a concert.

“There are a lot of stories about different aspects of the building,” says Alicia Loos a public relations coordinator for Portland Center for the Performing Arts, the group that manages the historic former movie house.

From the outside, with an iconic 80-foot Portland sign that’s lit up with more than 5,000 lights, the Schnitz, as locals call it, seems like nothing more than an old time concert hall. That was the case back in the 1970s, when it was scheduled for demolition. A parking lot was going to go where the circa 1928 theater sat, but thanks to a historic landmark designation in 1972, the building was saved. But not before many of the items inside were sold at auction.

“They literally passed a hat around to raise more than $5,000 to save ‘Surprise,” Loos says.

You see, Surprise a statue of a scantily clad woman – who has given more than one young boy an atanomy lesson when visiting the symphony, has a history. She had two of her fingers shot off during a gunfight that broke out in the lobby during the film “Wheel of Chance.”

The building was constructed in 1927 by the Chicago architecture firm of Rapp and Rapp, who also built the Paramount Theatre in Seattle.

Originally called the Portland Theatre, at the time of its construction it cost $1.5 million – a huge amount by the time it was finished in 1928.  In 1984, when the hall was renovated it cost $10 million and today there are still many parts and pieces that are missing from the auction. The theater was renamed the Arlene Schnitzer Concert Hall when the Schnitzer family donated the final $1 million needed for the renovations.

“They think the grand organ is in Denver somewhere,” Loos said as she walked up the steps to the upper balcony.

One of the items that had to be replaced was the Portland sign. After the original sign was refurbished and was being placed back on the building it fell off the crane, crashing into the street. A new sign was constructed, with lighter materials and more lights, according to Loos.

Today the theater is home to the Oregon Symphony, whose season is from the Fall until Spring. There are comedy shows, some limited plays and many other concerts at the venue. Check the Portland Center for the Performing Arts Web site for schedules and pricing.

Recently the sound system has been redone in the theater, so those who sit in the balcony get the same sound quality as those sitting in the lower level – a much appreciated feature for those who take in a lecture or rock show.

Surrounded by many restaurants, hotels and ample parking, it’s a great venue to see if you want to catch a show while visiting Portland, and well worth a visit just to appreciate the craftsmanship of the building.

The Arlene Schnitzer Concert Hall is located in the heart of Portland’s cultural district, right where she belongs.

About the Arlene Schnitzer Concert Hall: Home of the iconic Portland sign, this circa 1928 theater seats more than 2,700 people and is home to the Oregon Symphony. Many shows are offered at the historic concert hall, so check the schedule if you are visiting downtown Portland.

What to bring: An appreciation for the arts, and some time to enjoy the classic architecture and the amazing design features of this historic building. Flash photography – or cameras in general – are not allowed in the concert hall.

Season: The theatre is the busiest from Fall to Spring, but there are limited shows in the summer months. Hey, it’s Oregon, if it’s summer we are outside enjoying our few months of sunny weather.

Getting there: The theater is located at the corner of Broadway and Main Street in downtown Portland.

Tips: Try to take one of the tours offered every Wednesday and Saturday at 11 a.m. through 1 p.m. The tour consists of the Arlene Schnitzer Concert Hall and the Antoinette Hatfield Hall. Tours can be arranged by calling 503-274-6552.  There is plenty of parking and restaurants in the area of the Arlene Schnitzer Concert Hall, and it is also located only a few blocks from mass transit stops, light rail and the Portland streetcar.