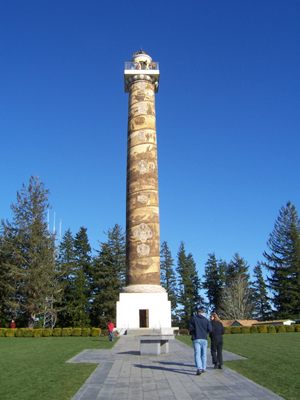 Standing in the grass at the Astoria Column, make sure you watch out for low-flying aircraft. Made of balsawood.

It's a tradition that has been going on at the column for years. Visitors buy small balsawood planes at the gift shop, climb to the top of the 125-foot column and launch them into the air. Shouts and laughter of children seeing how far and fast the planes will fly through the air much like the small planes.

"It's something to keep the kids interested," says Dana Day, assistant manager of the gift shop. "With the great views up here, you notice something new everyday."

Day says that visitors get five gliders for $3 and her shop at the base of the column offers everything from disposable cameras to programs and educational DVDs about the column's rich history.

The column, built in 1925 and dedicated in 1926, sits atop 600-foot Coxcomb Hill and offers expansive views of the many waterways surrounding Astoria. Whether you are interested in watching the ships enter the Columbia River or want to catch a glimpse of one of the four eagle nests - there is something to pique the interest of young and old alike.

"We have people come up here and just watch the wildlife," Day says. "I personally love watching the eagles nest and take care of their young."

The column hosts more than 300,000 visitors a year from all over the world and fund raising is under way to construct an interpretive center that would share the history of Astoria and Oregon.

Located in the center of town, the column is a good starting point for anyone visiting Astoria - looking down on the town can give you a sense of direction and you can locate the many attractions in the coastal community.

"You really get to learn a lot about history when you visit the column, if you can take yourself away from the view," Day says.

Climbing the column involves walking up 164 steps in a circular staircase inside the attraction. Once at the top you can see for miles on clear days. The weather on the coast is constantly changing - some days the views are blocked by the onset of fog, Day says.

At the base of the column is a topographical map of the area, so you can match up what you are looking at with the names of rivers and hills in the area. The artwork on the column has undergone several changes since the attraction was dedicated. The mural, made of sgraffito - an Italian Renaissance art form that combines paint and plaster carvings - was not well suited for the Northwest climate. Over the years several restoration efforts have taken place, the most recent being a $1 million restoration in 1995.

About the column: The Astoria Column is located on Coxcomb Hill and was dedicated in 1926. It has more than 300,000 visitors a year and features not only an Oregon history lessons, but expansive views of the Oregon coast and the Columbia River bar.

What to bring: As with all attractions, cameras are a must to capture everything from the wildlife to the views. Binoculars will help you watch freighters come across the Columbia River Bar and if you bring a sack lunch there are areas for picnics. In addition, there are hiking trails around the column so make sure to bring some hiking shoes if you are interested in climbing the 600-foot hill located in the middle of Astoria.

Season: The column is open year-round from dawn until dusk. They do close the column during high winds - something that happens mostly during the winter months. The gift shop is open from 10 a.m. to 4 p.m. Monday through Friday and 9 a.m. to 5 p.m. on the weekends. During the summer, the gift shop is open 9 a.m. to 6 p.m. seven days a week.

Getting there: From Highway 30, which wraps around Astoria, take 16th Street and follow the signs to the column.

Fees: There is a $1 charge for parking based on the honor system. Visitors pay the parking fee at the gift shop.

Tips: Make sure to visit the gift shop where they have many different books and pamphlets on the history of not only the column, but of Astoria and Oregon. Give yourself plenty of time to enjoy the views or to take a nature walk through the acreage the column sits on. Those who are phobic of confined spaces or heights can still enjoy the views from the base of the column - as the circular staircase and observation deck are a little confined.

If you are bringing the kids along, make sure to check out the authentic Native American boat and watch the ships coming across the Columbia River bar.

The markers were the pet project of Ralph Budd, president of the Midwest-based Great Northern Railroad. In 1925, Budd announced that he, other businessmen and scholars wanted to properly salute Astoria's explorers and early settlers for their role in the United States stretch to the Pacific Coast.