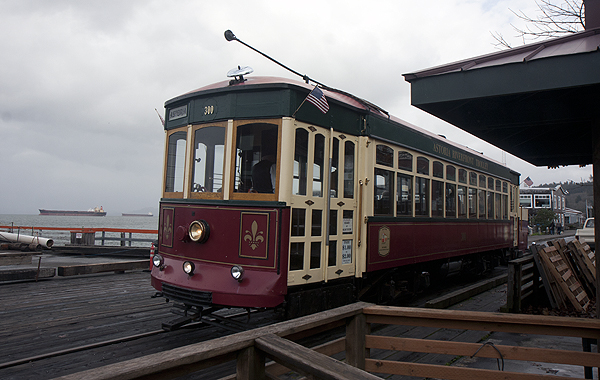 The ringing of the bell can be heard up and down the pier, as “Old 300” runs along the Columbia River in Astoria.

The trolley, which was originally made for the San Antonio Traction Company in 1913, runs from the East End Mooring Basin and West End Mooring on the original train tracks. Basically the trolley runs all along Astoria’s historic waterfront, which still features restaurants, docks and piers.

If you have an interest in the maritime workings of Astoria, or the history, taking the hour-long trolley ride is worth the very low-cost boarding passes.  If you stay on for the entire route, it is about three miles long and it started operating in 1999 when a group called the Astoria Riverfront Trolley Association, brought the car and restored it for the use. It has now become a part of the fabric of downtown Astoria and a must-ride for anyone who wants to see the history and old-world charm of the port city.

The service carries between 35,000 and 40,000 annually and it operates seasonally, and has a limited schedule during the winter months.

What I liked best about the trolley is that for a very low cost, you can park your car and then take the trolley up and down the waterfront of Astoria. There are several shops and eateries along the route, making it a great way to see an area of the city without getting in and out of the car. Along the route there are also covered benches to protect you from the coastal rains that Astoria sees even during the summer months.

During the different seasons the trolley is decorated, in American Flags for Fourth of July and garland during the holiday months. The schedule is clearly posted in the shelters, so it’s easy to figure out where it has been. There is even a GPS on the trolley when it’s in service to you can track from your smartphone, or web browser where it is.

The amazing part about all of this is that is run by volunteers – even people driving the trolley are volunteers who have been trained in the operation of the historic train. These volunteer conductors are great tour guides and will point out interesting places, pilot boats running out to the river, or even give you recommendations on great places to eat. Overall it’s a wonderful experience and great for anyone who likes trains, boats and being close to the water. Oh and kids get to ring the trolley’s bell – and even adults if you ask nice.

The view from the trolley is amazing, whether it’s seeing an angle of the Astoria-Megler Bridge you hadn’t seen before, or spotting sea lions and seals on docks or swimming, there is much to see and do along the waterfront.

About the Astoria Trolley:  Since 1999 an old 1913 trolley has been running along the Astoria water front giving visitors a treat and a chance to see some of the working ports, docks and restaurants along the three-mile route.

What to bring: Weather appropriate clothing – this is on the Oregon coast, so make sure you check those weather reports. While there are covered shelters, getting from the trolley to your destination can be wet!

Tip: Days when cruise ships are in are very busy for the trolley, so be aware there are some days that you may not be able to catch one of the 40 seats the trolley accommodates. Also checking its website at old300.org can give you information about the trolley and even a tracker to see where it is along the route.

Season:  The trolley is usually down for maintenance from Christmas through Memorial Day.

Getting there:  You can catch the trolley along the waterfront district in Astoria. Many people catch it at the Maritime Museum at 1792 Marine Drive, Astoria.