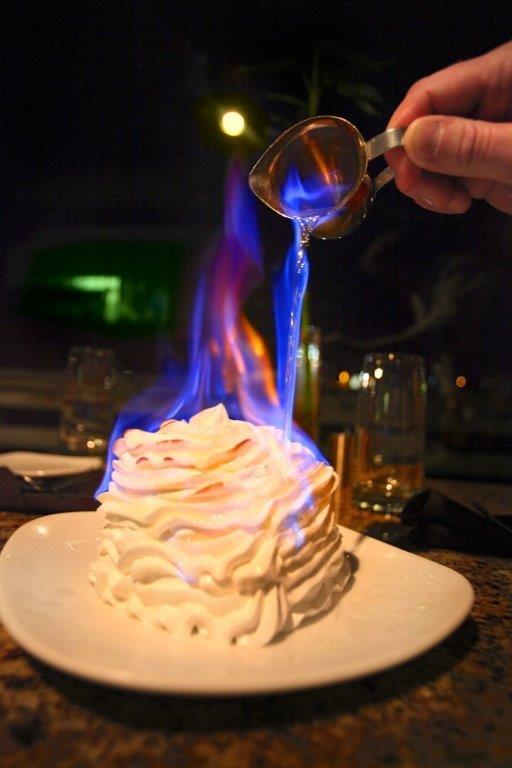 When you visit the Oregon Coast in the fall, you are never sure what you are going to get. Sometimes it is sunny and crisp, other times it feels like you are visiting a sponge filled with very cold water.

As luck would have it, as I visited the 14th Street Ferry Slip, it was a cloudy and windy day, however the breeze was pretty crisp, and that’s how I found my way to Baked Alaska.

This amazing restaurant takes up a huge building that overlooks the Columbia River, right on the pier.  In fact it is next door to one of the berths for the pilot boats that help vessels navigate the Columbia River bar and river into Portland. So while you are eating your lunch or dinner, you can see the pilot boat run out, drop off a pilot and return. It’s quite the view, as the dining room is surrounded by windows and there isn’t really a bad seat in the house. In the summer time there is also a deck out in the front of the restaurant that on the river side that is amazing. During the winter and fall months you can go out there to take pictures, but since it is so windy and rainy, normally it is closed.

While I was there for lunch, there were several freighters anchored along the river. My server told me that she had seen as many as nine waiting to cross the bar. They wait for either space to open up at their next port of call or weather. That’s the one thing I really liked about the restaurant, the friendly staff were always pointing things out, explaining river traffic and also making sure you had a refill of coffee or hot chocolate.

“We added a brick oven and wanted a place that was more family-friendly,” Holen said. Her husband, Christopher, is the chef who oversees the entire operation. “We wanted it to be really fun and a nice place for the family, that’s why we have pork belly pizza with bacon jalapeno jam and gluten free crust on some of our pizzas.”

Holen said the couple found Astoria on their honeymoon, and decided to settle down in the coastal city, providing some great food.  After attending the Scottsdale Culinary Institute, Christopher was required to go to Alaska where he helped provide a mobile soup kitchen. Then it was back to Astoria.

In 2001 the couple found the building they are currently located in, and have been operating it ever since. The Oregonian has called the restaurant one of the 10 best in the state, and the Holens say they are very honored people continue to like their food and location.

“We love Astoria and we have a six year old going to school here now,” Jennifer said. “We have been a part of the community and are also involved with the United Way of Clatsop County Iron Chef competition to help them raise money. We are involved in the community.”

When it comes to their food, it is simply amazing.  During lunch I sampled the classic fish and chips and it was the best lunch I have had in some time. My wife had the Dungeness Crab macaroni and cheese and sung it’s praises.

In fact they have also cooked at James Beard in New York and they offer tasting menus in the dining room.

“Our philosophy is that all the food we find here is wild, natural and sustainable, we don’t use farmed fish,” Jennifer said. “We have a great relationship with our purveyors and they help us find best products and quality. Being in fishing town, we have a plethora of seafood here. We know where our food is coming from, and the same with our produce. It is always in season and at its freshest.”
Of course we had baked Alaska for dessert.

“When my husband was in culinary school, since he is from Alaska, his friends would call him ‘Baked Alaska’ and the name just stuck,” she said. “He came up with the idea for his mock restaurant plans for school and we put them into action.”

About Baked Alaska:  A restaurant and pizzeria at the foot of the 12th Street dock along the Columbia River in Astoria. Named one of the top 10 restaurants in Oregon, it offers views that match its amazing food and hospitality. The restaurant has been in its current location for more than a dozen years and the couple who own it use only the freshest produce and protein.

What to bring: While this is one of the best restaurants in Oregon, don’t feel like you need to come in a suit. The attire is “coast casual” and you can see people in ties, but also in jeans and coats. While you can make a nice night of it, they understand that many times customers are coming from beach walking and exploring the Oregon coast.

Season:  The restaurant is open year-round.

Getting there:  The restaurant is located at #1 12th Street, Astoria, Oregon. It is along the Astoria River Walk and the historic Astoria Trolley line.