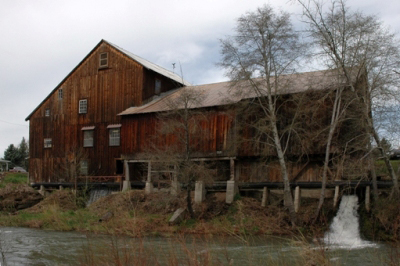 A lifetime of collecting antiques has served Bob Russell well.

Now the former Lake Oswego resident has the biggest antique he has ever collected – a circa 1872 water-powered mill and his restoration efforts are on display seven days a week.

Russell and his wife Debbie, have taken on a new adventure, and want people to share their experience with the only water-operated grist mill west of the Mississippi – the Butte Creek Mill in Eagle Point, Oregon.

“When I visited the mill it took me five seconds to realize I wanted to buy it,” Russell said as he walked along the old floorboards. “There was just so much that pointed to the fact that I should buy this place.”

From the tin ceiling tiles – the same that were in his Lake Oswego home – to parts of the mill that were forged at an ironworks in Oswego, there were too many signs to ignore for the Russells.

Where some people saw a money pit, Russell saw an amazing old business that could be brought back to life. Once he negotiated a price, he was off – bringing the 138-year-old mill back online and safe.

“This place still works on 1872 technology,” Russell said as he showed how old belts still turned the stone which mills the grain.

There is no water wheel, instead a millrace which flows water over gears and pulleys where it turns a turbine that makes the whole thing work. Russell has the oldest water rights on the Little Butte Creek, and is talking about looking into generating power that would provide electricity to the mill.

That’s the unique aspect of the Butte Creek Mill, if you seek out Russell, he doesn’t hesitate to give you a tour of the facility – the basement where all the gears, belts and pulleys are working to the mill room, where you can watch the grinding process.

Each corner of the old mill has a story about its reclamation, former use or antique treasures that were found. Russell moved from Lake Oswego to across the street from the mill – into an old rental house which he and his wife rehabilitated.

His gift, is taking the old, and making it seem new – or at least working like new.

“My wife gets upset at some of the stuff I have,” he said with a laugh. “My office is filled with antiques I am collecting.”

In the case of the mill, however, the antique Russell has purchased is one of the major destinations in Eagle Point, with people from all around coming to buy some of the freshly ground flour, meals, cereals or grains.

Russell has also cleared out blackberry bushes behind the mill, so in the fall you can watch salmon migrate, and there are even picnic tables where you can have a lunch.

“We want this to be as open and welcoming as possible,” Russell said as he walked along the creek.
The main floor of the mill has the mill store, where Russell and his wife sell mixes including pancake, waffle and cornbread mixes, just to name a few.

The Russells also operate an antique store next door in an old cheese factory, so you can spend a day just learning about the mill, looking at the creek, and browsing the antiques in the antique shop.

About the Butte Creek Mill:  The Butte Creek Mill and General Store is still one of Southern Oregon’s favorite destinations today as people come to take home the whole grain goodness of mills flours baking mixes and many culinary treats along with a whole lot of history. The mill began operation in 1872, built by the pioneers with double-bitted axes and hand saws felled trees that were already more than one hundred years old. Foundation pillars nearly two feet square, were hewn with broad axes; the beams were morticed together and secured to one another with hardwood pegs; boards for the walls were whipsawed from logs and nailed on with hand made square nails. The mill consists of a basement and three floors.

What to bring: Your curiosity, as Russell will give tours of the mill. Photography is allowed and flash is needed in many areas of the old mill.

Tip: Make sure you connect with Russell if you visit the mill. His tour is very interesting and he loves talking with people from all around about his business and its history. If you he isn’t around, take the time to watch a video he has produced about how the mill works and its history.

Season: The Butte Creek Mill is open year round. The best way to find out what the hours are is to call them at 541-826-3531. If you get addicted to their products, they also have an internet store where they will ship mixes and flours to you.

Getting there: To get to the mill just type 402 N. Royal Avenue, Eagle Point, into the GPS.  Directions are take Interstate 5, exit 30, then turn north toward Crater Lake on Oregon Highway 62 for approximately ten miles to Eagle Point. Turn right at the intersection of Highway 62 and Linn Road and follow the signs. It is two blocks off Highway 62 on the way to Crater Lake.