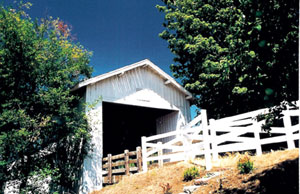 Background:
The area of Crawfordsville was named for Philemon Crawford, who settled in the area and on whose land the town was established in the 1870s.

The Crawfordsville Bridge displays another version of Linn County’s open truss style. The roofed span, built in 1932, shows a narrow slit window on both sides of the structure.

Originally the portals were rounded, but were later enlarged by State Highway employees to allow larger loads. Linn County turned the structure over to the Highway Commission when the road was designated a state highway.

In 1963, the bridge was bypassed and the state relinquished control to Linn County. The title has since passed to the Linn County Parks and Recreation Department.

Little upkeep or repair occurred in the 1970s. In 1976, crews involved with the filming of the television movie, The Flood, painted the span, and local residents repainted some of the bridge’s interior in the early 1980s.

Growing brush, trees and weeds began to hide the bridge, and in the summer of 1986, volunteers from the Covered Bridge Society of Oregon organized a cleanup day at the bridge site.

In 1987, some $23,000 in materials and labor were dedicated to renovate the bridge as a project of the Community Services Consortium, a federally funded program that trained and assisted in the job search for unemployed workers.

In the flood of 1996, the bridge sustained severe damage from drift which tore through the side skirting and hit a floor beam. Several of the one-inch diameter tie rods were broken or bent, leaving only two upstream tie rods and one downstream supporting the floor beam. The County received a grant from the Oregon Covered Bridge Program in the amount of $24,400 to replace four floor beams, supporting tie rods, replace one corbel and paint the bridge.