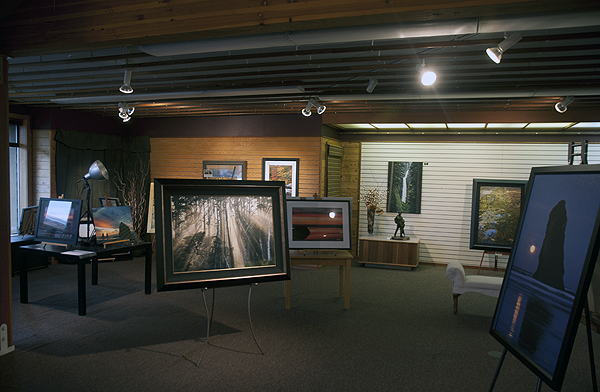 Cannon Beach has been a destination town since its inception, but during more modern times, it is being known more and more for its fine food and art.

In downtown Cannon Beach lining Hemlock and Spruce streets there is a group of galleries that instead of compete, complement.

Started more than a decade ago, the Cannon Beach Gallery Group was formed to start a spring unveiling of new art, and it has turned into a group that helps promote each other, support each other and, yes, even complement each other.

The 13 galleries range in items from jewelry to photographs, sculptures to paintings.

“We don’t coordinate too much, and don’t limit what each other can show,” said George Vetter, who owns George Vetter FotoArt. “Our only collaboration is in promoting art in Cannon Beach. We want to promote Cannon Beach an art destination.”

Vetter started shooting in Cannon Beach around 1977 and ever since has created some amazing images, not just of the coastal town, but around the world. His gallery is filled with images from around the globe that draw you in.

“I started with film and darkroom work, and now I am doing digital,” he said. “I moved to digital in 1999 and was amazed by some of the things you can do with it.”

He does everything from landscapes and buildings to portraiture, including a very special portrait shoot he did in 2010 of city leaders in Cannon Beach that is still being talked about.

But Vetter’s gallery is just the tip of the iceberg.

Archimedes Gallery is another gallery I really enjoyed during my visit. It features emerging and established artists from the Northwest and around the region. It has an eclectic grouping of items and I really had fun walking through.

If you like art that is inspired by the Oregon Coast, the Jeffery Hull Gallery is one you also have to see. Hull has been a Cannon Beach resident and artist for 40 years and his gallery is filled with paintings that look stunningly real. In fact, between him and Vetter, you can’t tell what is an image and what is a painting in several of their pieces of art.

Of course you can’t visit the Oregon Coast without also seeing some of the amazing glass artwork that is created on the shores of the Pacific Ocean. The Icefire Glassworks is another must-see gallery, if not the for the amazing building it’s housed in, then for the wonderful vases, wall hangings and other glass creations that capture light and color.

“We have a very nice mix of artists in our group, and that mix helps all of us,” Vetter said. “If someone walks into my gallery and is looking for something, I can point them in the direction of another gallery.”

In Vetter’s gallery he had items from other galleries, to help promote them and also to show people that there were many other types of art in the area.

Vetter said the group also pools the resources of the different galleries to not only put on the events it holds throughout the year, but also to purchase advertising to promote Cannon Beach’s art scene.

“You can see more than a dozen different galleries in Cannon Beach when you walk down the streets,” he said.

About Cannon Beach Gallery Group:  A group of 13 galleries that have banded together to promote Cannon Beach as an art destination.

What to bring: Since you will walk from gallery to gallery it’s a good idea to bring comfortable shoes and also wear weather-appropriate clothing.

Tip: If you are an art lover, give yourself at least a half of a day to visit all the galleries. If you are the type of person who likes to stand and really look at the art, a day should be set aside for this marvelous area of art and artists. In addition, many of the galleries I visited do ship, so don’t worry about trying to get that print or bronze figure on a plane or fit in the back of the SUV.

Season:  The galleries are open year-round.

Getting there:  Downtown Cannon Beach from Gower Street to Third Street along Hemlock and Spruce streets.