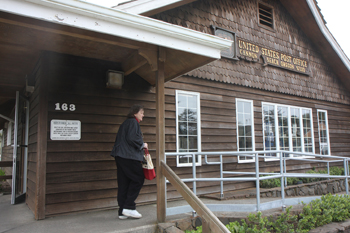 Cannon Beach is one of the cities on the coast that has a well-documented history, and is one of the places that Lewis and Clark visited. While you might think that means you have to spend time perusing a museum to learn about the history – and you can do that – there is a better way. Simply take a walk.

The Cannon Beach History Center and Museum offers a pamphlet that outlines all of the historic landmarks in the downtown Cannon Beach area. Learn what a natatorium is, or find out about the old roller skating rink, which is now a theater, by simply walking along the downtown and looking at the plaques that are posted on the buildings.
“We have found that people like to do their shopping and learn about the history of Cannon Beach at the same time,” says Grace Saad, program director at the history center and museum who oversees the walking tours. “We are expanding the program and finding volunteers who will give tours, so they don’t have to be self-guided. People can still get the pamphlet from us, and other places downtown, but they will also be able to take a tour with a local expert.”
Saad says that tours start in June and run through Memorial Day in September. The tours will be offered twice a day during Saturdays and Sundays and those who take the guided walking tour are encouraged to make a donation to the history center.
Saad said that the 15 historical sites along Hemlock and Spruce streets show that Cannon Beach is more than just a destination for shopping, but also a great educational site where people can learn about not only the early settlers, but how people recreated on the coast during the 1920s and ‘30s.
“The Wave Roller Rink was one of the earliest places where people could get entertainment in Cannon Beach,” Saad says. “You could skate all day, and boys would help get the skates on so they could skate for free.”
Saad usually starts the tours at Whale Park, at the end of Hemlock Street where Capt. William Clark, of the Lewis and Clark expedition, measured the carcass of a 108-foot whale that was at the drainage of Ecola Creek (Ecola means whale in the Chinook language) into the Pacific Ocean. Saad says the expedition bartered with the local Native American tribes for some of a whale that had washed up on shore. Today a statue of a whale sits where the creek meets the Pacific Ocean, and where the downtown walking tour begins.
Saad also likes to stop at the former Natatorium – or heated sea water pool – that residents used to swim in. The pool operated from 1924 until about 1941 and could serve up to 200 people. They would use the outside walls of the large structure to play movies on at night.
During the tour that Saad gave, she intermixed historical facts about the buildings, people and early life in Ecola – or Cannon Beach – with facts about the current day businesses, including where to get goofy hats, nice clothing and even a great bite to eat.
“I think people have a better understanding and can relate more if you bring the stories to today,” Saad says. “Plus, who doesn’t like to find a good place to eat – and I’m a foodie.”
About Cannon Beach: The downtown commercial area is approximately four blocks on the north end of Hemlock Street - the main street thru town. It is adorned with bright flowers and lots of places to stop and sit. South of "downtown," is the area known as "midtown." The far south end is known as Tolovana Park.
What to bring: Weather appropriate clothing and comfortable shoes. The Oregon Coast has moody weather, especially in the spring and fall, so make sure you check the weather forecast because storms and rain squalls can move in from the ocean quickly.
Season: If you are looking for a guided walking tour, you will have to do it between June and September. The walks are mostly given by volunteers, and to help offset the costs of the plaques on each of the buildings, and the printing costs of the pamphlets, people are asked to give a donation.
Getting there: Cannon Beach is off Highway 101 between Tillamook and Seaside. There are three exits along the highway, and the north end of town offers the most shopping options.
Tips: If you want to take a self-guided walking tour during the off-season, pamphlets for the tour are available at the Cannon Beach History Center and Museum, located at 1387 South Spruce Street, right off the East Sunset Blvd. exit on Highway 101.