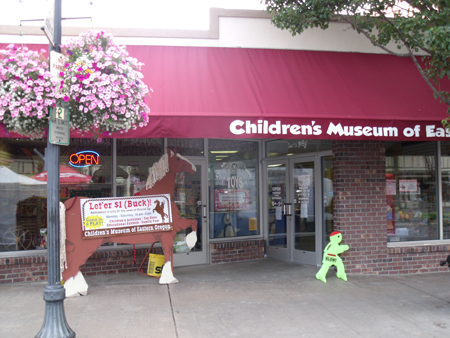 If you are travelling to Eastern Oregon from Portland with kids, by the time you hit downtown Pendleton, you will be ready to play “Guido the pizza maker.”

About the time your children are ready to drive you to the ragged edge of insanity, is when you will be in Pendleton, and while it’s a great place to spend the night, it’s also the site of an amazing children’s museum. It’s almost like they knew the kids needed to blow off some steam.

“This place is more than just a spot for kids to play,” said Jill Gregg, executive director of the museum. “This is a place where adults are encouraged to play with their kids, spend quality time with them and learn together about each other.”

The museum is anything but a musty place where you learn about the history of Eastern Oregon – it’s more of a romper room with dad’s and daughters shopping, sisters reading and moms chasing their toddlers all over. Expect to get a workout when you visit.

“We are all about play,” Gregg said. “We want the children to try everything here.”

There are arts and crafts, a science lab, a pretend grocery store and even a pretend pizza kitchen – where my nickname was “Guido.”

In addition there is also the toddler zone, construction zone, firehouse and a Lewis & Clark room.

The non-profit play place is 5,000 square feet and gets about 8,000 kids a year to visit. It’s the brainchild of Debbie McBee, who in June 1995 thought it would be a great way to help children learn through play about their world.

Opening day in 1996 featured more than 15 different areas of play – many of which are still open today. The museum is age appropriate for kids eight and under, but older children can play with their younger siblings as long as an adult is present. Don’t be confused, this isn’t a daycare, but a place where you can burn off some excess energy and learn at the same time.

The museum also has a gift shop where all proceeds go to supporting the museum, and items include puzzles, books and other learning toys.

“Some families in the area have been coming here two to three days a week for years,” Gregg said.
She said that you could spend as little as an hour at the museum, or if you were visiting for the first time and wanted to play in every area, you could spend a half a day.

If your trip means you will be spending an extended period of time in Pendleton, sign your kids up for some of the rich programming that is offered. From coloring contest to science classes, tumbling, yoga and even homework help, the museum offers a lot of activities.

“We normally have room for walk ins during our daily classes, but it’s best to call first,” Gregg said. “We usually have programs every day.”

Gregg said the museum was busiest when kids are out of school, so during the summer months and during holidays it is a place that is bustling with activity.

What to bring: Clothes that let you move, crawl, jump, paint and generally have fun with your child. Oh, and a camera wouldn’t be a bad idea either, as there are memories to be made at the museum.

Season: The museum is open year round.

Getting there: The museum is located at 400 South Main Street in downtown Pendleton Oregon.