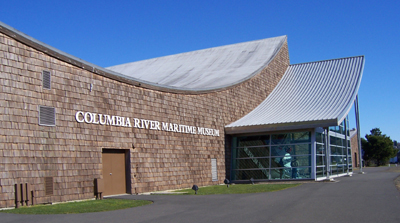 When the weather closed it, it hit like a hammer.

Without warning you find yourself in the Pacific Ocean being swallowed up by 30-foot seas - no hope of swimming to the shore you know is mere yards away.

Then, out of the blackness, comes a spotlight and a man hanging off of a boat reaching to pluck you from the ocean's grasp.

That's the first thing you see when you drive up to the Columbia River Maritime Museum - the real life 44-foot Coast Guard rescue boat in action.

The display, which has the boat suspended in the fake waves at a 45-degree angle, is the center piece of the museum's display on the dangers of crossing the Columbia River Bar.

When you walk into the Columbia River Maritime Museum the first thing you notice is an entire wall dedicated to the shipwrecks that have taken place on the most dangerous bar in the world. Called "The Graveyard of the Pacific," since 1972 the bar has seen approximately 2,000 vessels, including 200 larger ships, sink. Sitting back from where the Columbia River meets the Pacific Ocean, the museum's main entrance is a tribute to the 700 people who have lost their lives.

Founded in 1962, the museum is official maritime museum of the State of Oregon. It features six galleries, the great hall where movies about the river are shown, and has a light ship which is a floating lighthouse.

The museum is the only offical maritime museum for Oregon; it is a private nonprofit organization that is funded through membership dues, contributions and admission fees. It features every aspect of the river, from displays on commerce to areas on industry, wildlife and even war.

"I would have to say my favorite display is the Coast Guard rescue boat - it still has the motors in it and everything," said curator David Pearson. "Our newest display is on ducks that live on the river and has been very popular. We added that in October."

Pearson said that each year more than 100,000 visitors tour the museum - watching movies and learning about the history of one of the largest waterways in Oregon. Starting in the spring, the museum starts offering family classes in their conference room for people wanting to learn more about the river.

People who visit the museum can play inside the pilothouse of a tugboat - turning the man levers and controls - or see what it was like on the Battleship Astoria.

"We are very proud of the collection we have here and think it's one of the highlights of any trip to Astoria," Pearson said. "No matter if you are interested in the industry that operates on the river or the history of Oregon and how Native Americans used the river, there is something here for everyone."

History of the Columbia Maritime Museum

The Columbia River Maritime Museum was founded in 1962 when Rolf Klep, a native of Astoria, returned to his birthplace after retirement as a successful graphic artist on the east coast. Upon returning, Klep (a long-time collector of marine artifacts) and a group of his colleagues sought to establish a museum to preserve the rich maritime heritage of the entire Columbia River region. It is the first museum in Oregon to meet national accreditation standards, and has been designated the official state maritime museum for Oregon.

The Columbia River Maritime Museum celebrated its 40th anniversary and $6 million remodeling and expansion on May 11, 2002. The Museum renovation began in October 2000 and increased exhibit space to 44,200 square feet. The new space houses interactive exhibits that combine history with cutting-edge technology and numerous Museum acquisitions. Visitors of all ages will experience what it is like to pilot a tugboat, participate in a Coast Guard rescue on the Columbia River Bar, and live in Astoria during the height of salmon fishing. Huge windows make the Columbia River a living backdrop for exhibits that are interactive and touchable, many accompanied by interviews with people involved in the events depicted.

About the museum: The Columbia River Maritime Museum is an official State of Oregon collection of maritime artifacts and history about the Columbia River. It features everything from fishing to industry, to nature displays and search and rescue information. It is very interactive and great for children to learn about the largest river in Oregon.

What to bring: The museum in an indoor affair - the light boat Columbia is the only display that is outside - so cameras and comfortable clothes are the only things you will need.
Hours: 9:30 a.m. to 5 p.m. daily. Closed Thanksgiving and Christmas.

Getting there: Take Highway 26 out to the coast. Then take Hwy 101 to Seaside, continue North on 101 to Astoria. Continue through downtown on Highway 30 (also called Marine Drive) on the left at 1792 Marine Drive you will see the Museum. There are 2 Museum entrances found on 17th and 18th street.

Tips: Pearson said that tours of the museum generally take about two hours, but if you want to read about all of the exhibits and watch the interactive videos, the tour could be much longer. Before you walk through the museum, try to watch the movie in the auditorium, as it you will give you a great backgrounder on the history of the Columbia River. Make sure that you also visit the gift shop that offers history books, nautical-themed apparel, stuffed animals and other traditional gift shop fair.