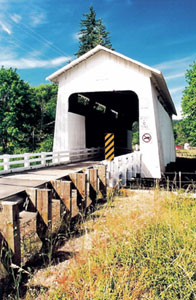 Background:
The Coyote Creek Bridge was originally part of Territorial Road (1851) and was included in the state secondary road system. The bridge was bypassed when truck traffic became too heavy and a more direct highway route was constructed.

Heavy snowfall severely damaged the bridge in 1969 as the weight of more than three feet of snow collapsed the entire roof. Chainsaws were used to saw off the rafters, and the bridge remained uncovered until early spring when county crews reroofed the structure.