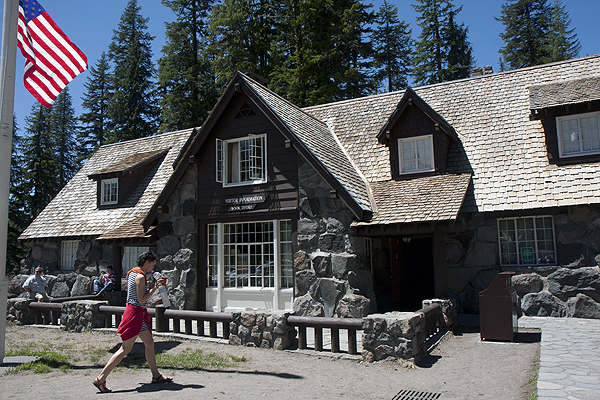 Crater Lake is one of Oregon’s most popular tourist attractions and to get the most out of your visit, you simply must stop at the Crater Lake Visitor’s Center.

Located at the southern entrance to the national park, the visitor center is also located at the park’s headquarters.  As such it is open year-round and the staff inside offer priceless advice and directions that will make your stay more pleasant.

I was there in early June, and some of the roads were closed, the staff there had maps and gave me directions to find where I wanted to go and see some of the sites.  They also have a very detailed topographical map inside that can show you just how much elevation change there is around the lake – a very important thing to understand if you are going to ride your bike or take a hike.

“We try to be as helpful as possible to people who visit,” said Brian Ettling, an interpretive ranger and naturalist ranger. “We answer questions, give directions, and share about the road conditions, the history of the national park, and the lake.”

When I visited I called the visitor center several times, as it was early June and the north entrance to the park was closed. Turns out on my way in, they opened the north entrance. Since I was coming from the north, I called and asked the status of the roads and was given an update. It’s those types of services the visitor center offers during the “shoulder season” when the snow is still on the ground in the spring, or starting up in the fall.

It’s an important service, especially since the area surrounding the lake can get up to 44-feet of snow every winter. With a 33-mile rim drive, it’s important to know which parts of the Rim Drive are open to drive with your vehicle to view the lake. The entire rim drive is usually open in its entirely from mid July through mid-October.

But the visitor center is more than just keeping you up-to-date on the road conditions.  "A new park film just debuted in June 2013, narrated by Peter Coyote and contains comments from park staff.  It is 22 minutes long.  It is shown each day every half hour from 9 am to 4:30 pm, so make sure to swing by the center to learn about the natural history of the lake.

The center also is a gift-shop, which goes to help keep the operation going and they have any number of tourist items, including water bottles, books, stickers, badges and a multitude of other items. The prices are reasonable.

The center is also where you can sign up for different programs, such as “snowshoe with a ranger” during the winter months. This program allows you to go on an adventure with a ranger (and a small group) who will take you on a two-hour walk and cover about 1-mile around the area.  Don’t worry, snowshoes are provided and you don’t need to have experience to enjoy the adventure.

The center has about 500,000 visitors a year, and the operation is alike a well-oiled machine, with a number of rangers in the building, planning routes, bike rides and pointing to areas that give the best view of the lake.

One of my favorite times at the lake is during late May and early June,” Ettling said. “It’s before the boats start running and there are no wakes on the lake. On a day with little wind, the lake can have a perfect mirror reflection.  It’s an amazing time with all the snow on the mountain peaks, the evergreen pines, the colorful volcanic rocks, and the bright blue colors of the lake. With all the snow and the possibility of the mirror reflection, I think late May and early June are the best time of year to photograph the lake.”

The roads to the visitor center and the lodge are open year-round which is a herculean task when there is a massive amount of snow that is falling. But much of the park can’t be accessed by car until the summer months.

What to bring: Depending on if you are going to drive around the lake, or snowshoe, ride a horse, walk, hike or simply stay at the lodge, it’s best to dress for weather that is significantly colder than the Bend area. The lake is higher than the cities around it, so be prepared for cooler temperatures. However, the rim provides magnificent views of the surrounding areas.  You are more than welcome to bring a good pair of binoculars and a telephoto lens for your camera to get better views of the area.  However, it is a tough park to spot wildlife, except for deer.  Most of them seem to be content to be deep in the park's old growth forests, far away from people.

Tip: The center has many free pamphlets they hand out, make sure to grab some as they are essential to finding trails, seeing the sites and learning about the area around the lake.  One in particular, the “Crater Lake Reflection” looks like a newspaper and has a list of current activities and information about the park, including historical data. I also purchased a map, as it had all of the hiking and equine trails around the rim that people could enjoy.