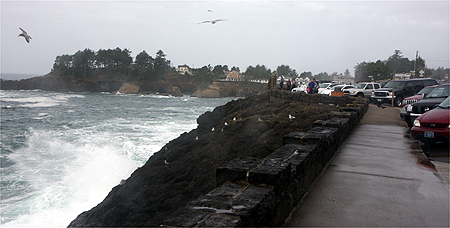 Standing at the sea wall at Depoe Bay is a truly unique experience.

During sunny days, you are right on the ocean and can see out to the horizon, catching glimpses of whales, sea lions, birds and charter and fishing boats. Stand at the edge of the sidewalk, looking out into the ocean during a stormy day, you better be prepared to get wet.

It isn’t uncommon to see waves crash over the wall and onto parked cars along Highway 101, showing the true power of nature. Giggling teens, running from the ocean spray are a common occurrence at the sea wall – walking away drenched head-to-toe.

The crashing waves are called “spouting horns” as there is basalt rock all along the coastline around Depoe Bay. Over time the water has carved out tubes in the rocks, where water rushes in, and then is shot out, creating spouting horns. You can look over the sea wall to see these rock formations, but make sure you time your gaze right, or you could end up for a face full of sea water.

But the crashing waves aren’t the only one reason to stop at this small city between Lincoln City and Newport. Across Highway 101 – don’t worry there are very clearly marked crosswalks and drivers are very good at stopping – is a real treasure-trove of this small coastal town.

“We have more than 20 stores along the sea wall that offer everything from t-shirts to high-end art,” said Carole Barkhurst, office manager of the Depoe Bay Chamber of Commerce. “The shops are mostly owned by local residents, so I tell people that shopping there is supporting our local economy.”

In fact, almost everything about Depoe Bay screams “local,” even during the holidays the decorations along the highway are made by residents.

What is known as the “sea wall shops” by locals, can remind you of an old boardwalk, but it runs parallel with the sea instead of out into it.

Barkhurst said that the shops offer everything from tourist items to high end art. Most of the theme of the shops is nautical or pirate.

“What I have found is that each shop has something unique,” she said. “They don’t all carry the same things, and I think that helps all of them.”

The variety of the items in the shops is only matched by the price-range. You can get something as small as a sticker for $1 or a painting or jewelry for several hundred.

“What I like about it is that you can have lunch for $8, go through some shops and spend a little money and enjoy yourself,” Barkhurst said. “Or you can have a very nice seafood lunch and pick up some very nice art. It all depends on how much you want to spend and where your interests lie.”

But shopping isn’t the only thing you can do in Depoe Bay.

“We have a thriving charter fishing and whale watching fleet,” she said. “We have the world’s smallest navitigatable harbor, and it’s right on the ocean so it makes getting out to sea very easy.”

The sea wall shops line up to a bridge, where the charter companies have offices. There are two main companies which offer charters – Tradewinds and Dockside – and boats go out daily depending on the weather.

But while visiting the “whale watching capital of the Oregon coast” isn’t enough, Barkhurst said there are several hiking trails off the highway that offer great views.

“Everything we do here is small town, and that’s what makes it special,” she said.

About Depoe Bay: Depoe Bay is teeming with marine life and rich in natural resources. The stunning beauty of Depoe Bay’s rugged rocky coastline, snug harbor and easy access via Highway 101 make it one of the most popular destinations along the Central Oregon Coastline. A huge sea wall runs the length of the downtown area allowing visitors to shop or dine always within view of the ocean. We have the distinction of being the only town on the entire coast with this amenity.

Tip: Just because you don’t see parking along Highway 101, don’t give up! There is ample parking behind the shops off of the highway. Plus, if you are driving up or down the Oregon Coast, this is the perfect stopping point to get lunch, or pick up a present, or simply stand at the edge of the sea wall and feel like you are standing on the ocean.

Season: Barkhursp says the small bay town really has two seasons. First is the summer months between July and September if you are looking for good weather. However, the second season is in September and October. “That’s when the seniors come out because the kids are in school,” she said. The shops and sea wall is open year round.

Getting there: The town is located between Newport and Lincoln City right on Highway 101.