Driving Directions
From Bend, take State Highway 372 (Century Drive) east for 4.5 miles to the boundary of the Deschutes National Forest where the Byway begins. The Byway comes to an end as Forest Route 46 meets State Highway 58.

Description
This 106-mile loop takes you through the Elkhorn Mountains, gold-mining ghost-towns, and along elegant lakes and rivers. You can learn a lot of history here, and also hunt, fish, camp, boat, ski, and hike.

Anthony Lake is much bigger than Grande Ronde Lake, but it's just as serene. Angell Peak staggers above (and on the reflection of) this crystal-clear lake. A breeze always whispers-it's up so high-which makes the easy, lake-circumscribing trail even easier. The campground is open from July to late Sept. Camping does cost a fee. Day-use does not. 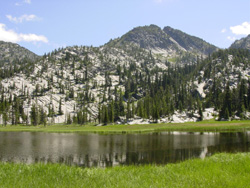 Baker City Historic District - Of the 110 buildings in the Historic District, 60 have been restored to their original elegance. Some are now banks, bed and breakfasts, and museums, etc. Restorations are continuing; the tall and white 1927 Baker Hotel, (the site of political conventions,) is being redone at the time of this writing (summer 2000).

Baker City was known as the 'Queen City of the Mines,' and by 1900, its population was larger than Boise's (at the time.) An excerpt from the Walking Tour Guide: 'Restaurants in fine hotels served superb cuisine…the opera house was frequently filled to capacity…The 1800 block on the east side of Main had five saloons and several brothels. Children and ladies avoided the block, but the Salvation Army band played there nightly, hoping to rescue fallen souls.'

Eastern Oregon Museum - Often called 'Grandma's attic,' this museum boasts over 10,000 items; an outstanding collection of household, farming, mining, and pioneer artifacts. The old Union Pacific depot is on the grounds; it was donated when the railroad discontinued stops at Haines in 1962. There is also a century-old poplar tree from Washington Gulch; a scythe has grown into the tree where a forgetful harvester hung it before the turn of the century. Hours are 9 a.m. to 5 p.m., April 15 to Oct. 15. Groups by appointment (call 541.856.3233) There are no fees, but donations are accepted.