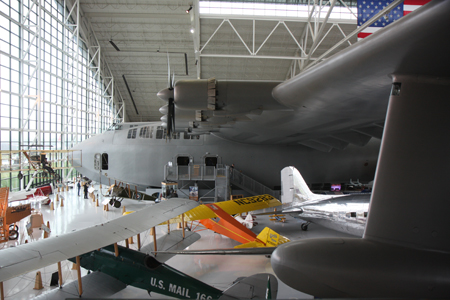 When you enter the Evergreen Aviation & Space Museum you drive down a runway, and that’s not where your flight experience ends.

From the many airplanes parked in front of the three buildings, to the huge 747 you see as you travel down Highway 18 to the museum, if you even have a fleeting interest in aircraft or space, Evergreen will keep you busy for at least half a day.

“That’s the biggest thing I see from people who visit,” said director of operations Philip Jaeger, “People don’t give themselves enough time to see everything. This isn’t some place you can breeze through in an hour.”
With more than 150 aircraft, spacecraft and exhibits, fill three buildings making up more than 250,000 square feet there is so much to see that even locals visit the museum many times, with each time finding something they didn’t know before. In fact, the museum is always adding new exhibits, with an F-15, DC-121, a MiG and and F-104 expected to be added. In February 2009 the museum became an affiliate of the Smithsonian Institute.

There are different levels of tickets, that give you access to the flight museum, the space museum, and the non-profit’s IMAX theater in different combinations. If you do purchase tickets to see both museums and the IMAX make sure you give yourself plenty of time, as the air museum alone can take several hours to walk through quickly reading the plaques and looking at the different planes.

To get the most out of the museum’s offerings, by far the most informative and enlightening option is taking a guided tour from one of the museum’s docents. The tour, which takes about over an hour, has a guide who knows a lot of information about each of the aircraft in the museum, and at many of the aircraft, people who flew missions are there to share their experiences.

On the day I visited the museum, a gentleman who flew Avenger Torpedo Bombers explained not only his training to get his gold wings, but also how to land one of the historic fighter planes. After his 10 minute talk, he answered questions and it really brought the exhibit to life.

“I like to say visit for a day, experience a lifetime,” says director of operations Philip Jaeger.

Of course the star of the museum is the “Spruce Goose,” Howard Hughes’ flying boat, which dwarfs all of the other air exhibits in the building. Visitors can walk up some stairs and actually look inside the aircraft.

At many of the aircraft there are interactive exhibits and airliner chairs around the floor of the huge building with videos playing, in case you missed one of the guided tours.

In the space museum, which opened in June 2008, the highlight is the Titan II ICBM which visitors can see close up. In addition there is one of the Mercury 10 space capsules.

“This is one of the original capsules,” Jaeger says. “It didn’t go to space, but it isn’t a replica.”

What to bring: A good set of walking shoes, as there is a lot of walking involved to see all of the exhibits. There are chairs around the buildings for people who want to stop for a bit and take a rest. Flash photography is allowed, but the lighting in the museum can be tricky. The more time you spend at the museum, especially if this is a one-time visit, the better.

Season: The museums are open year round, every day, including weekends, from 9 a.m. to 5 p.m. The museums are closed on Thanksgiving, Christmas, and Easter Sunday. They close at 2 p.m. on Christmas Eve. Open 9-5 New Years Eve and New Year's Day.

Getting there: When traveling South on I-5, take exit #294 for Tigard / McMinnville and follow the signs to McMinnville. Continue on Highway 99W through Dundee until the Highway 18 “Ocean Beaches” junction. Turn left on Highway 18 and continue for approximately four miles. The Museum is on the right.

When traveling North on I-5, take exit #253 at Salem for Highway 22 / Mission Street and follow the signs for Highway 22 / Mission Street through Salem. Stay to the left on Highway 22 after crossing the Willamette River. Turn right (north) at the intersection with Highway 99W. Continue northbound on Highway 99W to the outskirts of McMinnville. Take the Highway 18E exit and continue for approximately four miles. The Museum is on the left.

Tips: Try to get one of the guided tours to get the full experience of the museums. If you have time, also buy tickets for all three attractions, the flight museum, space museum and see an IMAX movie that usually has a flight or space theme. Try to schedule your trip to get a docent tour. There is also a gun museum on the second story of the flight museum, and from there you get a unique view of not only the “Spruce Goose” but also the entire museum.

History: Evergreen International Aviation founder, Delford M. Smith, and his son Michael King Smith, collected vintage warbirds and began the process of creating a world class aviation museum in Oregon and incorporated the museum in 1991. They strive to create a museum that would keep the inspiring stories of early aviators alive while encouraging other visionaries to pursue their dreams.

In December 2001, the Spruce Goose exhibit opens at the museum after it is selected by The Aero Club of Southern California to be custodian of the flying boat in 1992. Moving, restoring and refinishing the aircraft takes nearly 10 years, but is the cornerstone of the museum’s collection.  Michael King Smith is tragically killed in a car crash in 1995, leading Evergreen crews and members of the Oregon Air National Guard to hoist a F-15A Eagle onto a pedestal, creating a memorial to Captain Smith and Major Rhory Roger Draeger.

In March 2007 the IMAX theater opens followed by the Space Museum in June 2008. The museums now have more than 150 aircraft and exhibits on display.