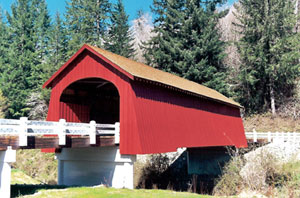 Location:
From Interstate 5, take the Corvallis exit (228) west 38 miles through Philomath on US 20. Follow Highway 34 southwest through Alsea and continue 20 miles west to the Five Rivers-Fisher Road (Forest Service Road 141). Turn south at the fork at Siletz Road. Continue left past Buck Creek Road about one mile to the bridge. Alternately from Yachats, travel east on Forest Service Road 1560 about 20 miles. This route is not recommended because the road is extremely rough and steep. Note: Forest Service Road 141 connects to the Deadwood Bridge in Lane County.

Background:
The Fisher Bridge is located in the rugged foothills of Lincoln County. The structure spans Five Rivers, so named because of the five streams of Alder Creek, Cougar Creek, Buck Creek, Crab Creek and Cherry Creek which make up the stream.

According to George Melvin, a workman who helped to build the bridge, a group of farmers aided in construction by cutting large trees in the area which they shaped into logs with the use of broadaxes. After the main framework was completed, it was enclosed with lumber cut at the saw mill operated by the Olsen brothers.

During the 1970s, residents of the Fisher community rallied to preserve the bridge, which was slated for demolition. Following construction of a concrete bridge a few feet away, Lincoln County invested about $2,000 to replace the rotted siding on the covered span.

Among the supporters was Roy Olsen, a relative of the brothers who provided the lumber that was used to enclose the trusses during the original construction. Due to close proximity of the Fisher Elementary School, some refer to the covered bridge as the Fisher School Bridge.

The area around Five Rivers was the site of other covered bridges, including the 36-foot Buck Creek Bridge built in 1924 and located 2 miles north of Fisher, and the Cascade Creek Bridge, also a 36-foot span built in 1927, just 2 miles west of Fisher.

Only the Fisher Bridge remains. Design features include semi-elliptical portal arches, narrow ribbon openings under the side wall eaves, flared side walls and wood piers.