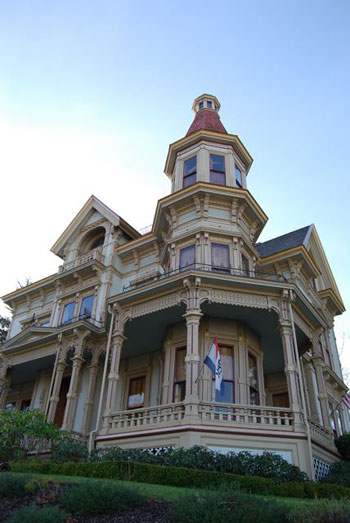 Would you like to step back into the 19th century? Visit the stately 11,600-square-foot Flavel House, with its two and a half stories, rear kitchen, butler's pantry, four-story tower, attic and basement.

Gracing the entry, a stained-glass window welcomes you. Step over the threshold into the magnificent main hallway, with walls restored in green hues. Inlaid hardwood floors gleam under the fourteen-foot ceiling.

The first floor was designed for entertaining. The parlor, library, music and dining rooms are restored with antiques from the late Victorian era.

Climb up a winding wooden staircase to the second floor with five bedchambers, tall windows, 12-foot ceilings and a central bathroom with an enclosed tin-plated copper bathtub, flushing toilet with a pull chain and marble sink.

Although not open to the public, stairs lead up four floors to the tower with a cupola, used by the family for observing the river traffic on the mighty Columbia River.

The Flavel House has six fireplaces, each unique with decorative tiles, ornate hand- carved mantels, and a patterned firebox designed for burning coal. Master craftsmanship was used on the wooden mantels and throughout the mansion. One mantel is graced with stuffed birds under glass.

This was the retirement home of Captain George Flavel, who had it built from 1884-1886. He lived in it with his wife, Mary Christina Boelling, and two of their children, Nellie and Katie. George Conrad, their son, was married and living in his own home.

Captain Flavel lived a colorful life as an entrepreneur and bar pilot, guiding ships through the treacherous mouth of the Columbia River. Astoria's first millionaire, he was revered for his integrity and support for the townspeople. Mary helped manage the household and involve herself in social events.

The Flavel House reflects the Queen Anne architecture, popular during the Victorian era.

A walk around the mansion provides views of the wraparound porch, decorative work above the window molding, octagonal tower, patterned shingles, the steeply pitched roof, and the asymmetrical façade.

One imagines the grounds as they were with roses, raspberry bushes, a pond, croquet area, cypress trees, Port Orford cedar, Gingko, Elm and Sequoia Redwood trees. A bench under the pear tree was used by Nellie and Katie to sit in the shade.

The house shares a full city block with a carriage house, which housed buggies, a carriage, sleigh, stables and upstairs, a hayloft. Today, it is the starting point for the tour. You can see a video showing the history of the Flavel House, browse in the gift shop and memorabilia museum.

Much of downtown Astoria was destroyed by fire in 1922, but the Flavel House is one of the survivors. Twice, it was almost demolished for a parking lot and community park. Fortunately, the townspeople rallied to fight its destruction. Hence, it stands as an historical museum today. Operated by the Clatsop County Historical Society since 1950, it is listed on the National Registry of Historical Places.

Take your time on the self-guided tour. Picture images of Nellie and Katie playing their grand piano for recitals and singing, learning etiquette, writing journals, reading or doing needlepoint by the fire, perhaps in their fancy dresses.

George and Mary may have been reciting poetry or meeting distinguished guests in their formal living room. Take a peek in one of the closets and you can view the Captain's stovepipe hat.

As Polly McKean Bill, an early pioneer of Astoria, recalls, "This large Victorian mansion, which dominated the lower residential area of Astoria, had for me the quality of a fairy story castle. Dignified and spacious, it was almost awesome in its air of elegance."

About The Flavel House: This restored Victorian mansion is a must see in Astoria. Take a self-guided tour to view the period décor and Queen Anne style architecture. You will learn its fascinating history and marvel at its elegance while you step back into the 19th century.

What to bring: Take your camera but remember not to use a flash inside the mansion.

No food or drinks are allowed inside the museum.

Hours: The mansion is open from 10 to 5 (November through April) and 11 to 5 (October through March). Closed: Thanksgiving, Christmas and New Years

Admission: $5 Adults, $4 AAA/Seniors (65)/Adult Students, $2 ages 6-17, free for ages 5 and under. Purchase admission tickets at the Carriage House. Also view their video for background on the Flavel House, visit museum and gift shop.

Teas:
* Plumb pudding and tea is available from the week before and after Christmas (2-4 pm)
* Mother's Day

Tips: Children can read books, play checkers and games in the "hands on" activity room on the second floor.

Directions: Take Highway 26 to the coast. Then, take Highway 101 north to Astoria. Continue through downtown on Marine Drive (Highway 30) and turn up 8th street for two blocks until you see The Flavel House on 8th and Duane. The post office and Court House are across the street from it.

For more information: Call the Clatsop County Historical Society at 503-325-2203. They have restored and operated The Flavel House as a museum since 1950. It is listed in the National Registry of Historical Places.

All photos courtesy of Sue and Keith Groves

By Sandra Kennedy
For Oregon.com