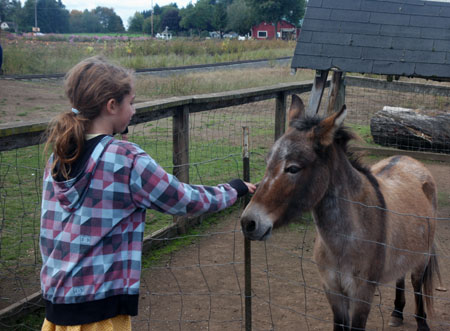 The first words screamed, shouted or even whined by most kids when they arrive at The Flower Farmer’s farm in North Canby is “Can we go on the train?!”

The farm, located about a mile outside of Canby, has been an attraction for more than 20 years with locals going to the farm almost as frequently as people from out of town.

The farm is surrounded by a miniature train-track which runs the Phoenix & Holly Rail Road, several small-gauge trains that take visitors around the farm.

Each season has a different attraction, but there are several highlights throughout the year.

When you first arrive at the farm, you are greeted with one of the best farmers markets in the area, undercover, it is great year-round and offers freshly squeezed cider, apples, gourds and cut flowers, depending on the season. Kettle corn is also available – for you addicts out there.

The store doubles as a flower shop and they do arrangements and offer dried flowers throughout the year. You can also get your railroad hat, T-shirt, train whistle or even wooden train if you want a memento from your visit.

The store also has a tractor for kids to climb on and for parents to pose their little ones to take photos.

One of the things Leo Garre, the owner of the farm, is known for is his railroad persona. He can be seen all around Canby in his coveralls and railroad hat, and is one of the happiest and friendliest people you will meet.

The train runs when the farm is open, which is usually Memorial Day until the weather gets bad after Halloween. Kids love the ride, but it’s more than just a train ride, it has several stops as you circle the farm.

The first stop is a small petting zoo, where adults and children alike can pet goats, bunnies and a donkey. You can also feed the chickens, but make sure you have some change so you can buy the feed out of the machine. There is also a hand washing station, so germs won’t be a problem.

During the 20-minute train ride there are several “tunnels” or buildings that the train passes through, and depending on the season, there are different decorations. During the Halloween time, when I visited, there were spooky ghosts and goblins – but not too scary – this is an attraction for kids as much as adults after all.

Each Halloween Garre and his staff build a giant hay pyramid that has a maze inside of it for kids to explore. The pyramid stands about 20 feet tall, and kids scamper up to the top and raise their hands like they are king of the world, yelling and giggling the entire way. Older kids should go into the dark maze, as littler ones could get scared and disoriented.

Surrounding the hay pyramid are several hundred pumpkins, and you can pick them out, put them on the train. Many families will ride one train to the pyramid and then wait for the next train about 20 minutes later, to ride back. This gives the kids more time to play and find their perfect pumpkin.

There is also a snack cart at the play area, so if you get thirsty or hungry, there is an opportunity to buy some snack food items.

While Halloween and October is a great time to visit the farm, it is at its full splendor during the spring and summer months.

Flowers bloom, crops are in season and the farm holds a Basil and Art Festival at the end of August into early September that features local artists and many wonderful examples of using fresh basil in cooking.

Whether you are looking for a farm experience, a train ride, or the perfect apple, The Flower Farmer is an excellent way to see the agricultural side of Oregon near the Portland Metro area.

About The Flower Farmer: Outside of the small town of Canby, The Flower Farmer is a great place to ride a train, get fresh fruits and vegetables and get up close to some farm animals. There are different attractions on the farm depending on the season, so make sure to check the website before heading out if you want to know what’s out on the farm.

What to bring: It’s Oregon and it’s a farm, so boots are in order. Unless it is the height of summer, wear shoes that you don’t mind getting dirty and scuffed up. Also, if you plan on riding the train, make sure you dress for the weather, as it has open-air cars. Cameras are welcome on the farm, as are bags if you want to get a pumpkin.

Tip: After visiting the farm, keep heading north of Holly Street where you will run into the historic Canby Ferry. It will take you across the Willamette River and during the summers it’s a great way to see the river and take the road less travelled. After crossing the ferry, follow the signs back to Interstate 5.

Season:  The farm is open from May through October.

Getting there: The farm is about a mile north of Canby on Holly Street. The address is 2512 N. Holly, Canby, Or, 97013. You can also find them on the web at www.flowerfarmer.com