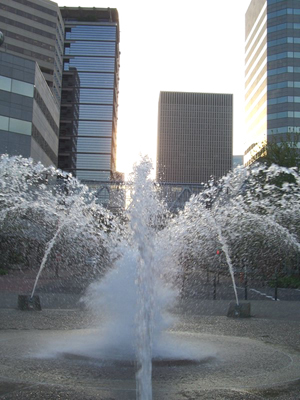 Water everywhere, for everyone: public fountains in downtown Portland

"We're a water city, surrounded by rivers. It's nice to be able to see it everywhere," says Margaret Smith, a lifelong resident of the area, while she watches granddaughters Dionika and Nikayla Newell splashing in one of the many fountains maintained by the Portland Water Bureau. On summer days, three generations of her family, including daughter Nicole, enjoy the cooling waters, and they are far from alone.

There is something for everyone, continuing a tradition of nearly 120 years. From architectural masterpieces to staid monuments to whimsical sculptures, water features throughout downtown serve as more than a visual reminder of the close relationship between Portland and this ubiquitous but precious liquid.

Some were built to quench the thirst of humans and animals alike, others to honor the city and its people, and yet others simply to beautify; all of them cannot help but delight.

The Bureau "provides some lovely amenities. Where water flows [or] there is the sound of water, people find relaxation," offers Tricia Knoll, Communications Director for the city's vital utility.

Perhaps the best known fountains are the city's legendary "Benson Bubblers," the beloved and elegant bronze bowls that provide fresh drinking water throughout downtown. They became such a symbol of the town's openness and hospitality that they are now featured as the logo for the Bureau.

Lumber magnate and early Portland legend Simon Benson, eager to provide his employees something cold to drink along the then logging roads of Portland, paid for the original 20 fountains, which he decreed should flow uninterrupted 24 hours a day. A. E. Doyle, designer of the Central Library and Benson Hotel buildings, was the mastermind behind the equally graceful four-bowl drinking sources.

As a teetotaler himself, he proudly touted the fact that saloon sales dropped 40% soon after their installation. The upsurge in the temperance movement is a more likely cause, but that does not detract from the magnate's generosity or the beauty and function of its product.

By 1917, the city had doubled their number, and now the Bureau maintains over 120 public drinking fountains, including many with a single fountain head and bowl. The rare 3-bowl variation is named after Nellie Robinson, the benefactor who, like Benson, left her gift to the city. The city's conservation efforts, however, have adapted and restricted the water flow while preserving the aesthetics of Benson and Robinson's gifts.

"How to measure?" asks Knoll out loud regarding the popularity of the different fountains. "Other than going around on a summer day and counting the people there." Salmon Street Springs, by any measure, would be featured close if not at the top of the list, and it is there and then she might meet Smith and her progeny, who come because "it's easy to get here. And there's always someone playing music," explains Smith's daughter, Nicole Newell. As she speaks, there is a three-man band only a few yards away.

Taking a break from playing in what may be the best known feature of Tom McCall Waterfront Park, 7 year-old Dionika boasts, "We've been coming here about 3 years, since before I started kindergarten." Her little sister, at 5 years of age, only knows that she likes the multi-jet waterworks. Both girls "wonder how it changes," since the fountain cycles through three different patterns, "bollards, mister, and wedding cake."

If the girls had the chance, they could see that there is a computer below the round "springs." This machine dictates changes in the water sprays every 15 to 20 minutes, ranging from graceful arcing jets from the edge of the circle to its center, to a drenching spray, to two tiers of vertical jets. The computer and its holding vault only require maintenance once a decade or so, according to Knoll.

Nicole's personal favorite is Ira Keller Forecourt Fountain, an impressive 1971 structure now dedicated to the memory of the spearhead of Portland's revitalization. "You can wade in it, swing your legs and kick the water around," she says with a smile. "Or sit on the stairs and feel the water rushing from behind you."

Originally named simply Forecourt Fountain, this 1971 design by Angela Danadjieva was critically acclaimed as "one of the most important urban spaces since the Renaissance." This simple yet striking feature recalls the rivers and waterfalls that the form and adorn the Columbia River gorge. The fountain echoes nature's majestic expanse also, taking up most of an acre.

The steps leading up to the jutting "cliffs" and down and to the platforms that seem to float at the base have always been a crowd pleaser during hot summer days. The lawns surrounding the fountain are perfect for sunbathing. On evenings throughout the year, it makes a perfect strolling ground for theatre- and opera-goers from Keller Auditorium during intermission, with a cozy little nook hidden away by a cascading sheet of water.

Approximately ten blocks away from Keller Fountain stands another exceptionally beautiful work, honoring all Portland citizens. Bearing Joseph Shemanski's name, this Italianesque cast stone and bronze piece makes up for its small size with its elegance and eloquence.

A clock salesman who went on to build a considerable retail empire, the Polish immigrant commissioned the work to honor his adoptive city. Complementing a beautiful sculpture of the biblical scene of Rebecca at the Well, the trefoil stone work features drinking fountains at three levels each for humans and animals.

The city's love for animals is also evident in one of its oldest public works of art, which is also one of its most significant. Skidmore Fountain, located in what once was the heart of the newborn city was posthumously commissioned by Stephen Skidmore, specifying it should serve "horses, men and dogs."

Upon its completion nearly 120 years ago, East-Coasters claimed the grace of the fountain was out of character with the then "frontier town." Perhaps more fittingly, brewing legend Henry Weinhard offered to pipe beer through it to celebrate the dedication, but his suggestion was declined.

Olin Warner, the artist, used his wife as a model for one of the three caryatids. The unofficial motto of the town, "Good citizens are the riches of a city," is carved into the stone of the fountain, which was visited by President Harrison during his tour of the state.

In turn, this work inspired yet another beautiful piece serving humans' companions. Elk Fountain is one of the most elegant troughs for horses and dogs. The most unique, however, of Portland's gifts to its pets, is undoubtedly the watering dish designed by dog lover-cum-photographer William Wegman. Nature lovers will also delight in the 9-part series "Animals in Pools," which feature cast bronze sculptures of local fauna in realistic poses.

"There are many of us who quietly enjoy The Carwash," says Knoll of the whimsical 1977 steel sculpture with multiple jets standing near Burnside, the city's main artery. Of the same age and located a few blocks away, the 20-foot tall Lee Kelly's Fountain is another decorative feature, the product of an international design competition.

At the other end of downtown, Manuel Izquierdo's "The Dreamer," a stylized reclining woman in Muntz bronze represents the hope for "beauty … love, and … a better life in our midst."

Although articulated little over 25 years ago, Izquierdo's dream is perhaps the best way to describe the motives behind Portland's 120 year history of celebrating water and, of course, life itself.

About Portland's Public Fountains: The Portland Water Bureau maintains 17 decorative and over 120 drinking fountains throughout the city. These range from the Water Bowl by Wegman, designed specifically for dogs, to the graceful Benson Bubblers, to the massive Keller Fountain. Other significant downtown fountains not mentioned in this article include Lovejoy and Chimney Fountains at the southernmost end, the granite and marble Waterfall Fountain at Pioneer Courthouse Square, A Fountain for A Rose in O'Bryant Square, and The Bathtub on 6th Ave.

What to bring: A camera or sketchbook. Swimsuit or clothes that may get wet if you are interested in cooling or wading in the fountains, or reliving your childhood sprinkler experiences running through Salmon Street Springs. Leave coins behind- it is not recommended to throw coins into these fountains.

Getting There: Many of the fountains are accessible through public transportation within TriMet's Fareless Square. Shemanski, Lovejoy, Chimney, The Dreamer and Ira Keller Forecourt Fountains are a short walk from the Portland Streetcar route. Waterfall Fountain at the Square, Animals in Pools, Salmon Street Springs, Elk and Skidmore Fountains are on or not far from all MAX lines. The Carwash, Lee Kelly's Fountain, A Fountain for A Rose and The Water Bowl are on or close to West Burnside and TriMet Route 20.

Tips: You can admire the fountains, but beware that unless expressly intended for it, the water circulated through them should not be drunk, as it is recycled and chlorinated as it would be in a swimming pool. Portland's drinking water, however, is considered some of the best in the country even though it is not fluoridated. The water in those fountains designed for animals (such as Shemanski, Skidmore, and Elk Fountains as well as Animals in Pools) is safe for their consumption, but humans should not drink from them.

History: The history of Portland's public fountains in or near downtown spans almost 120 years, starting with the 1888 dedication of Skidmore Fountain and reaching into the 21st Century with Jamison Fountain in the park honoring one of the main supporters of the development of the Pearl District and Portland's art scene. Many of these, such as Keller, A Fountain for a Rose, Skidmore, The Dreamer and the Benson Bubblers are critically and popularly acclaimed. Although some are the products of local to international design competitions (Waterfall, Lee Kelly's, Chimney Fountains), many were gifts and commissions for the city by private citizens (Shemanski, Skidmore, Elk Fountains).