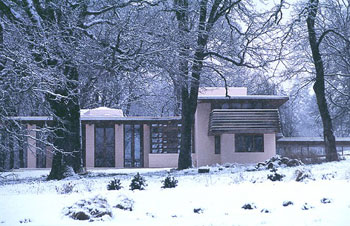 Snatched from the jaws of destruction at the very last minute, the Gordon House now sits safely in the sanctuary of an ancient oak grove at the Oregon Garden in Silverton. The state's only Frank Lloyd Wright-designed house originally occupied a scenic setting on the south side of the Willamette River, near the Charbonneau development in Wilsonville.

Completed in 1964 for Conrad and Evelyn Gordon, the house was an example of Wright's efforts to design affordable housing for families earning modest incomes. He called the style Usonian, an acronym for United States of North America, and it was characterized by use of inexpensive, mass-produced, local materials and an open floor plan that encouraged social gatherings. Only 60 of them were ever built.

The Gordons occupied the house for over 30 years, and upon their death, heirs listed the house and 22 acres of adjacent farmland for $2.2 million, well beyond the reach of any non-profit, preservation organization interested in buying the landmark house. However, the property was outside the Urban Growth Boundary, and could not be subdivided into smaller, buildable lots. It eventually sold for considerably less to a young couple interested in constructing a new, much larger home on the site. When they applied to the county for a demolition permit, the local architecture and preservation communities rallied to save the house. The new owners agreed to sell it for $1 to the Frank Lloyd Wright Building Conservancy based in Chicago with the understanding that it had to be removed from the property within 105 days.

The Oregon Garden, located in Silverton, was chosen from several different bids for the house, largely because of its attractive, oak grove setting. At the cost of over $300,000 with only four days to go before the removal deadline, the house was carefully dismantled and slowly driven on a flatbed truck down the back roads of Marion County to its new home. It took almost another $700,000 to pay for restoration, easements, and other expenses.

While not one of Wright's famous, flashy buildings for wealthy clients, it clearly reflects many of his design elements and architectural philosophy. The cinder block, Western red cedar, 2100-square foot building, sits low to the ground, with a definite horizontal feeling so typical in Wright designs. It features an open floor plan, overhanging eaves, carport, and flat roof. Upon entering the house, the low foyer opens up into a twelve-foot high great room lined with floor to ceiling windows and doors creating continuity between indoors and out. A large fireplace dominates one wall reflecting

Wright's belief that the hearth should be the heart of the home, architecturally and spiritually. The room includes many built-in pieces of furniture and all cabinets, drawers, and hardware are consistent throughout the house. Wright often designed the furniture and storage in his houses in order to provide an uncluttered look. The cement floor, painted Cherokee red, encases a system of pipes supplying hot water and radiant heat to the house. Wooden fretwork covering the upper windows defines the library and dining alcoves and provides a measure of privacy without the use of drapes or curtains. A tiny kitchen with bright orange Formica countertops and original appliances is made to seem larger by a two-story skylight.

Upstairs are a pink-tiled bath and two small bedrooms. Tall, glass doors opening out onto deck areas, add a feeling of spaciousness.

Since 2002, the house has been an integral part of the Oregon Garden. It is open to the public for tours daily, May through October, and on a more limited schedule during the winter months. Call 503-874-6006 to make reservations.

While Wright, considered by many to be America's most influential and prominent architect, left behind a rich legacy of homes and buildings throughout the United States, only about 60 are open to the public. Oregonians are lucky to have one in their backyard.