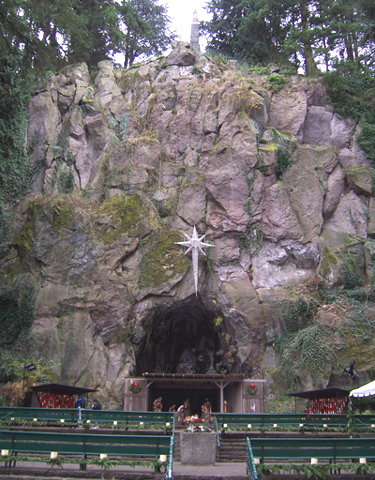 Dancing in the breeze, the trees at The Grotto swayed to the beat of the East wind.

"In Rome shrines are often called sanctuaries," says the Rev. Jackson Topper, OSM, executive director of the shrine. "In our case it has a double meaning. We are a shrine, but also a sanctuary for people looking to get away from the busy world we live in."

The Grotto is located in East Portland and offers everything from a place for quiet contemplation to a good brisk walk through the trails - and during the holidays it's known statewide for the incredible Festival of Lights that fills the sanctuary with holiday songs and the glow of thousands of little lights.

For most of the year The Grotto - which is also known as the National Sanctuary of Our Sorrowful Mother - is a 62-acre Catholic Shrine, featuring botanical gardens and nature path. The Grotto is a non-profit corporation supported by the proceeds of its gift shop and by donations. It features a conference center, a chapel and hundreds of statutes - with the main attraction being a marble replica of Michelangelo's Pieta located inside the grotto.

Visitors can go to the top of the cliff that contains the grotto to see the bronze statue of Our Sorrowful Mother, designed especially for the location and blessed in the Vatican by Pope Pius XI in 1934.

Topper says that crowds are initially attracted to the two main statues, but he often sees them coming back to see some of the items they missed during their visit.

"We have streams, ponds, a rose garden, a peace garden, trees and many statues," he says. "There is always something new to see. Just the other day I was watching all of the airplanes taking off from the airport through the trees. It really does show me God's creation every day."

Topper also says that the concerts in the Chapel of Mary - which features wonderful acoustics - are some of the best in the area. The chapel was built from rock quarried from the cliff and seats more than 500 people. Information is available about the services and concerts on The Grotto's Web site.

If magnificent views are what you are after, the upper area of the sanctuary is where you want to be. From a birds-eye view of Portland to the natural beauty of the setting, the upper area is a place that must be seen to be believed. On a clear day several of the area's mountains are visible and you can even catch a glimpse of Mt. St. Helens. The upper level can be reached by trails or by elevator for those who might not be able to make the trip on foot. Most of the trails are paved and very even - so the risk of injury for hikers and walkers is very slight.

"We have people from all different faiths and backgrounds visit," he says. "I urge people to come and experience God's presence in our lives."

What to bring: As with any outdoor venue in Oregon, it's good to dress weather and season specific. In the spring and fall, layering is a good idea while also being prepared for the random rain shower. During the winter expect everything from heavy rain to even ice. The wind is also a factor, so expect to have some windy conditions when you visit as The Grotto is located close to the gorge.

The Rev. Topper said that most people only need to bring their cameras and have enough time to reflect or just take a slow hike to the top of the cliff in the middle of the sanctuary.

Getting there: The main public entry to The Grotto, located on Sandy Boulevard (Highway 30) at Northeast 85th Avenue, is near the junction of the 1-205 and 1-84 freeways just minutes from downtown Portland and Portland International Airport.

From 1-5 or Downtown: Take 1-84 Freeway eastbound and exit at NE 82nd Avenue. Follow the off-ramp and feeder street to the signal. Turn right on to NE 82nd (Highway 213) and continue northbound approximately 2 miles to Sandy Boulevard. Turn right (eastbound), stay in the right lane, and continue 1/4 mile to The Grotto's main public entry at NE 85th.

From 1-84 Westbound: Take the 1-205 northbound exit. Stay in the right lane, and take your second exit (#23B - Highway 30 Bypass). Stay in the left exit lane to a Sandy Boulevard Westbound. Continue 3/4 of a mile to The Grotto entry, located on the left at NE 85th Avenue.

From 1-205 Southbound: Take Sandy Boulevard exit #23A. Stay in the right lane as the exit forces you to turn right and cross the freeway overpass. Turn right at the first signal, next to the Best Western Motel, onto Sandy Boulevard westbound. Continue 3/4 mile to The Grotto, located on the left side of the street at NE 85th.

Tri-Met Mass Transit: Riders can take the #12 (Sandy Boulevard) east bound to The Grotto, or the #72 (82nd) north bound to Sandy Boulevard, we are three blocks east of 82nd avenue on Sandy Boulevard. They are within in walking distance from the new Parkrose/Sumner Transit Center.

Fees: Admission is free, but during the Festival of Lights, which usually runs from Thanksgiving to the end of December, there's a general admission charge during the evening hours.

Tips: Rev. Topper said one of the keys to enjoying The Grotto was giving yourself plenty of time to take in the natural setting, statues and learn about the religious significance of some of the displays. He also says that the special events are also very special. If you can, visit during Freedom Sunday or one of the other celebrations they have.

Give yourself at least an hour and a half for a quick walk through the sanctuary and wear comfortable shoes. Bring a camera, as some of the views are spectacular.

History: The Grotto was established by the Servite Friars in 1924. The central attraction, Our Lady's Grotto, was carved from solid basalt in the cliff wall in 1925, where the Pieta is featured.