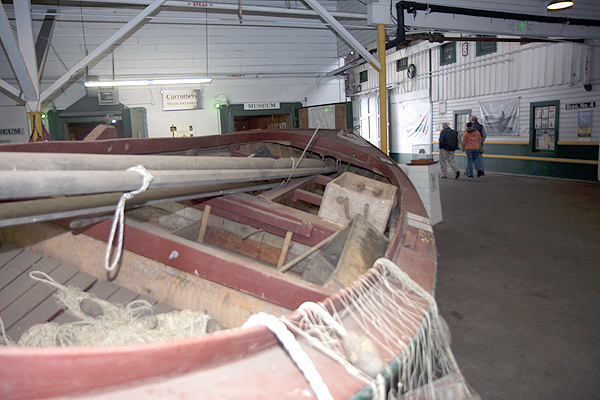 Many times when I visit a historic site, I go into it with an attitude that is almost like an academic. I have an interest in learning what happened at the place I am visiting, but rarely do I get an emotional reaction.

As I wandered around the dark Bumble Bee canning facility, I notice they had hats and other personal items from the people who used to work there, but don’t any longer. If you stand next to some of the old equipment, you can almost hear what it sounded like back in the 1970s when the plant was operating and it was Astoria’s largest employers.

Today, it’s a museum that is a stark reminder about how the decline of the Salmon and other fisheries along the Columbia River, also meant the decline of the fishing and canning jobs. What was once a city that relied on natural resources – Astoria was named after fur baron John Jacob Astor – now relies on its cultural and historical attractions.

Located next to the Rogue Ales Public House on Pier 39 in eastern Astoria, this museum might not have the glitz and glamor of the Columbia River Maritime Museum, but it tells and important story about the history of the city and the people who worked there.

What I enjoyed most about this museum is that it showed you the entire process, from the gill nets and vessels that caught the tuna and salmon, to the processing procedure and the canning process. It even got into the workers and what they wore and how many there were at the peak of production.

The actual name of the cannery is the Hanthorn Cannery and it is the oldest fish processing plant remaining on the lower Columbia River.  The museum is run by former workers and managers of the Columbia River Packers Association and the Bumble Bee Seafood Corporation to commemorate the work done by thousands of employees who worked there between 1875 and the late 20th Century. An interesting fact is that Bumble Bee Seafood was founded in Astoria, and it closed its headquarters there in 1981.

Inside the museum are three wooden gillnetting boats that show just how courageous these fisherman were, because the boats are pretty small for the amount of nets and fish they were pulling daily. In addition, seeing just how dangerous some of the machinery was gave me the chills as I walked through the old wooden-floored processing plant.

Whether it was reading old media accounts of the plant and the fishing, or seeing the old cans of Bumble Bee and knowing that Oregon had a part in starting one of the largest seafood companies in the world, there is much to see when you visit.

The museum does work well as a self-guided tour, and you can take up to an hour if you read all of the interpretive signs that are scattered throughout the museum. One of my favorite parts of the museum was reading about the past fishing heritage of the area, while hearing the sea lions barking on the docks nearby.

With the museum sitting on a pier, it gives you a very cool vantage point to be close to the water, and you can even walk out and see some of the working docks. Looking out over the Columbia River you can also see freighters and other boats navigating the river and the Columbia Bar, adding to the ambiance of the site.

To get to the museum you drive out onto the pier, something I haven’t done before, and while the access dock was pretty narrow, it does fit two larger vehicles and parking on the pier is a cool experience for anyone. What we did after walking through the museum was enjoy a warm drink over in the Rogue Ales Public House which is right next door.

About The Hanthorn Cannery Museum:  The Hanthorn Cannery is the oldest fish processing plant remaining on the lower Columbia River. Our facility houses a collection of historic equipment and documents that is second only to the Columbia River Maritime Museum in the region. Many of these resources are accessible to the public at our museum, located at what is now called Pier 39, in historic Astoria, Oregon.

What to bring: The museum is covered, but it is open air and out on a pier in the Columbia River. That means during the spring, fall and winter months it gets cold. Bundling up is paramount if you want to enjoy yourself. In addition the museum is pretty dark, so make sure if you plan to take photographs you bring a flash that works. The museum doesn’t charge admissions, but donations are welcome and the foundation running it does have plans for expansion. So having some extra cash on hand for a donation would be helpful too.

Tip: To be honest the museum is hard to find. I walked right by it before I realized that I was entering it from the river-side entrance. There is a big access, and to your right will be a door where the official entrance to the museum starts. In addition, there is limited parking on the pier, so before you drive out to the museum and restaurant, try to determine if you are just going to have to turn around and find a parking spot on land instead of on the pier.

Season:  The museum is open year-round.