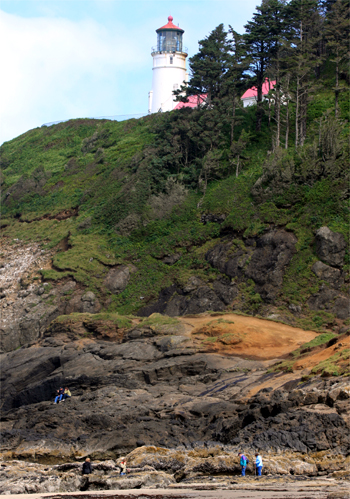 A few headlands over from the Sea Lion Caves lies one of Oregon’s most photographed lighthouses, the Heceta Head Lighthouse.

Surrounded by a state campground to the north, and a state park to the south, the lighthouse can be seen from Highway 101, or up close and personal if you are willing to take a bit of a hike.

While the lighthouse is 56 feet tall, it stands 205 feet above sea level thanks to the bluff it is placed on. It’s a bluff you have to climb if you want to see the lighthouse up close and personal.

For day trippers, parking at the Heceta Head Lighthouse State Scenic Viewpoint is a great way to see a number of different attractions in one stop. Parking below a historic Highway 101 bridge, you can then walk out onto the beach, where there are numerous tidepools teaming with life. Starfish, crabs, clams and other sea life can be spotted, especially when the tide is out. Off the beach are two large rock formations that are filled with birds.

“We have seen eagles flying around out here lately too,” said Debra Edwards, an Oregon State Park ranger who oversees the park. “A lot of times there are also seals from the caves to the south playing the surf. There is a lot to see.”

Once you have discovered the caves along the headlands, walking back to the parking lot will get you to the ½ mile trail that leads up to the assistant light keeper’s house and lighthouse. The trail is a series of switchbacks heading up the headlands, gaining bout 150-feet in elevation in the ½ mile. The trail is smooth enough for strollers or even a wheelchair, however there are roots that cross the trail and in places it does get fairly narrow.

The views from the trail are stunning, looking down at the ocean pound against the headlands. At a brisk pace it takes about 15 minutes to get to the lighthouse, and once there you can easily spend several minutes just looking out at the ocean. It makes a wonderful spot to watch for whales migrating, if the weather cooperates.

Before you get to the lighthouse, however, the assistant light keeper’s house is now set up as a bed and breakfast, and there is also a gift shop where you can stop for refreshments, or the standard tourist fare of statuettes, clothing and walking sticks.

At the lighthouse, volunteers conduct tours where they tell of the history of the lighthouse, the different design features and how it’s maintained. The tour is well worth the time, if you can wait for a tour. During the summer months the tours are very popular, so it isn’t uncommon to have to wait up to 30 minutes to get into a tour group.

“We tell people that if they are coming with a group, it’s best to call ahead and warn us so we can have extra volunteers ready,” Edwards said. “The best time to come is off-season when there aren’t as many people.
Being so close to the Sea Lion Caves, we get a lot of visitors during the summer months.”

Edwards said to experience both the beach and the lighthouse, visitors should give themselves at least two hours – remember it’s about a 30 minutes to climb up and back from the lighthouse on the trail.

About the Heceta Head Lighthouse: Built in 1892, the lighthouse and head are named after Spanish explorer Bruno Heceta who discovered the area. For more than a century the lighthouse has delineated the head and been an aid to navigation. It was listed in the National Register of Historic Places in 1978. It can be seen from Highway 101, but for the best views take the hike to the base of the lighthouse.

What to bring: If you are planning on making the hike, bring weather appropriate clothing, as the Oregon Coast can be bright and beautiful, or a windy, rainy adventure. The trail leading up to the lighthouse is gravel and dirt, so during the winter months wear appropriate shoes or hiking boots. If you go on a nice day, make sure to bring your camera, and binoculars are a good idea as well.

Tip: To experience the tidepools and explore the base of the head the lighthouse rests on, make sure to check the tide tables to see when low tide will occur. At high tide many of the rocky formations are covered by sea water. In addition, if you visit the tidepools at low tide, then walk the 150-feet to the lighthouse, it is spectacular to watch the tide come in, crashing against the rocks.

Season: The Heceta Head Lighthouse is open year round, and each season has something different to offer. For more information about the lighthouse, or to schedule a group tour, call 541-547-3416. For more immediate information, contact the ranger staff by e-mail at heceta.h.lighthouse@state.or.us

Getting there: The lighthouse park is 12 miles north of Florence right off Highway 101. Signs are clearly marked. Make sure if you park at the state park to purchase a day-use permit, as rangers are monitoring who pays and who doesn’t and will issue tickets.