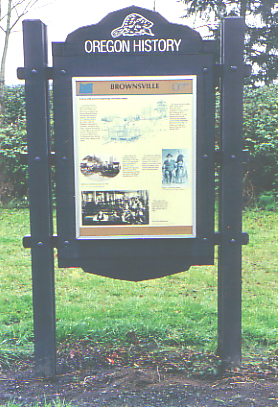 A TOWN WITH ANCIENT BEGINNINGS AND MANY NAMES

Long before the first pioneer settlers arrived here in the 1840's, this area was occupied by the ancient Mound Builders and then the Kalapuya Indians. The relative ease of finding food in the valley made the Kalapuya vulnerable to intruders, including other tribes, because they did not need to fight or go very far for food. At the time of Lewis and Clark, about two thousand were distributed in forty villages in the valley.

The town was first called Kirk's Ferry when Alexander Kirk established a ferry across the Calapooia River around 1846-47. It was operated by his wife, Sarah, on the frequent occasions that Alexander Kirk had to be away. A bridge was built just upriver from the ferry around 1853. When Henry H. Spalding (earlier a missionary to the Nez Perce) was appointed first Postmaster in 1850, the name changed to Calapooya. Linn County's first organizational meeting was held in Spalding's Schoolhouse in 1849.

In 1853 James Blakely laid out a town plat on his claim south of the river, naming it for Hugh L. Brown, his partner in the Brown & Blakely store located along the east side Territorial Road.