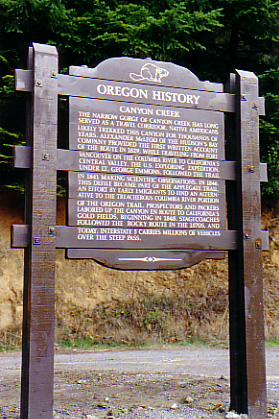 The narrow gorge of Canyon Creek has long served as a travel corridor. Native Americans likely trekked this canyon for thousands of years. Alexander McLeod of the Hudson's Bay Company provided the first written account of the route in 1829, while traveling from Fort Vancouver on the Columbia River to California's central valley. The U.S. Exploring Expedition, under Lt. George Emmons, followed the trail in 1841 making scientific observations. In 1846, this defile became part of the Applegate Trail, an effort by early emigrants to find an alternative to the treacherous Columbia River portion of the Oregon Trail. Prospectors and packers labored up the canyon en route to California's gold fields, beginning in 1848.

Stagecoaches followed the rocky route in the 1870s, and today, Interstate 5 carries millions of vehicles over the steep pass.