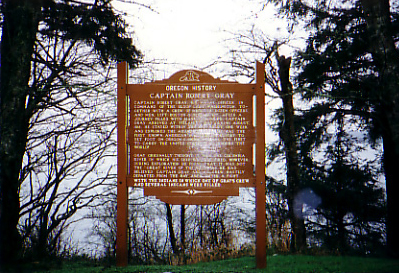 Captain Robert Gray, U.S. Naval Officer, in command of the sloop Lady Washington, together with the crew of about a dozen officers and men, left Boston October 1, 1787. After a journey filled with many hardships, Captain Gray arrived in Tillamook Bay during august 1788. He stayed within the bay about one week and explored the adjacent area. He was the first known American in recorded history to set foot on Oregon shoreline, and the first to carry the United States flag around the world.

Gray originally thought it was the Columbia River in which his ship was anchored; however, during the exploration he found that it was not the "Great River of the West" as he had believed. Captain Gray and his crew hastily departed from the bay area after a flight with the Indians in which one of Gray's crew and several Indians were killed.