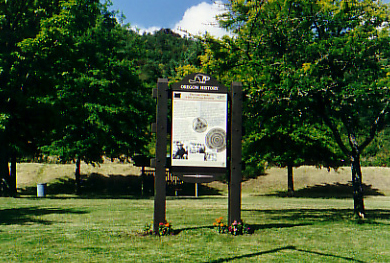 The story of the Cow Creek Band of Umpqua Tribe of Indians is a tale of perseverance and strong recovery in the face of great loss. Epidemics and hostilities with miners let to large population declines. The tribe entered into a treaty with the United States in 1853, and ceded nearly 800 square miles for less than three cents an acre. This treaty left them without access to traditional hunting and gathering areas or a land base to build upon.

Despite a treaty with the U.S. Government - one of Oregon's first - clearly defining boundaries of their homelands, a federal program of Indian removal attempted to forcibly remove the Cow Creeks to reservations in northwest Oregon. Many members eluded capture by hiding in remote parts of the region - seven core families maintained a continuous presence in the area. The U.S. Government ceased pursuing them by the 1870s, and tribal families began to gradually emerge from hiding.

The 1853 treaty provided for various services that the U.S. Government disregarded for nearly 130 years. The Cow Creeks sued the United States for restoration of federal recognition in 1982, and a monetary settlement of $1.25 per acre for lands ceded (1855 priced) was awarded in 1984. The tribe placed the entire settlement in an endowment account using interest earnings for economic development and tribal programs. In 1992, the Cow Creeks began a substantial economic development program in Canyonville with economic self-sufficiency as their goal.