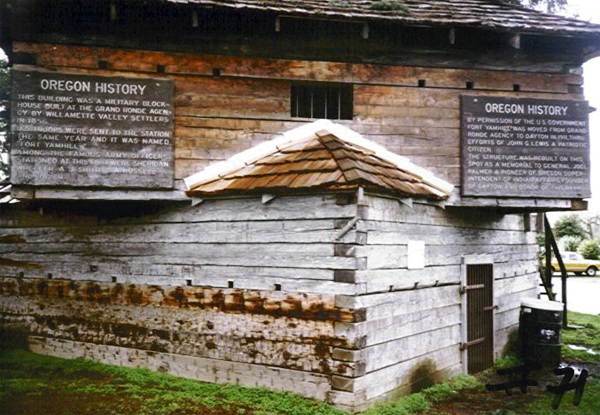 (Sign A) This building was a Military Blockhouse built at the Grand Ronde Agency by Willamette Valley settlers in 1856. U.S. troops were sent to the station the same year and it was named "Fort Yamhill." Among the famous Army officers stationed at this fort were Sheridan, Wheeler, A.J. Smith, D.A. Russell and Hazen.

(Sign B) By permission of the U.S. Government Fort Yamhill was moved from Grand Ronde Agency to Dayton in 1911, through efforts of John G. Lewis a patriotic citizen. The structure was rebuilt on this spot as a memorial to General Joel Palmer a pioneer of Oregon, Superintendent of Indian affairs, Founder of Dayton, and donor of this park.