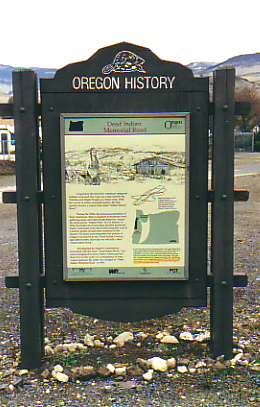 Long before the first Euro-American emigrants trekked westward, this road was a trail used by the Takelma and Shasta Peoples as a trade route. With the arrival of settlers and gold-seekers, the trail quickly became a wagon road called “Indian Market Road.”

During the 1850s, the increased population of Euro-Americans, their occupation of traditional food gathering areas, and often hostile behavior, caused the most serious “Indian Wars” in U.S. history. In 1854, the bodies of several dead, possibly murdered, Native Americans were discovered along this road in a narrow prairie several miles northeast of this marker. For many years thereafter this portion of Oregon was known as the “Dead Indian Country,” and until recently, this road was officially called “Dead Indian Road.”

Recognizing the negative connotations associated with the name ”Dead Indian Road,” and acknowledging that many Native Americans lost their lives in this valley as a consequence of westward expansion, the name was changed to “Dead Indian Memorial Road” in 1993.