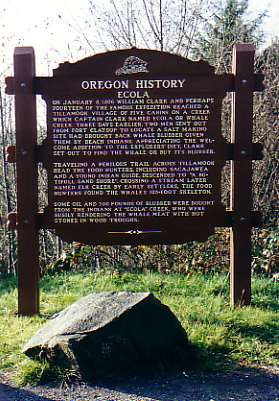 On January 8, 1806 William Clark and perhaps fourteen of the famous expedition reached a Tillamook village of five cabins on a creek which Captain Clark named Ecola or Whale Creek. Three days earlier, two men sent out from Fort Clatsop to locate a salt making site had brought back whale blubber given them by Beach Indians. Appreciating the welcome addition to the explorers' diet, Clark set out to find the whale or buy its blubber.

Some oil and 300 pounds of blubber were bought from the Indians at "Ecola" Creek, who were busily rendering the whale meat with hot stones in wood troughs.