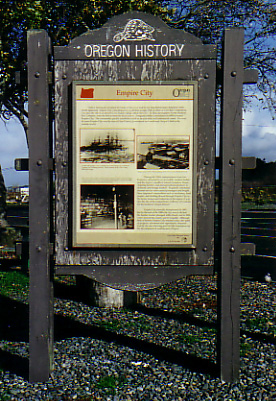 Native Americans occupied the banks of this river and its bay long before Euro-American settlements appeared. Empire City, a bustling port of call that occupied this portion of Coos Bay’s waterfront, was once the site of an ancient Coos Indian village called Hanisitch. In 1826, fur trappers for the Hudson Bay Company were the first to meet the local natives. Emigrant settlers arrived here in 1853 to found Empire City. The community quickly established itself as an economic and commercial center. For over 40 years Empire City was the seat of Coos county government and southwest Oregon’s link to the outside world.

During the 1850s, entrepreneurs from San Francisco, attracted by an accessible, modern harbor and the region’s wealth of natural resources, began shipping lumber, coal and agricultural products to domestic and foreign markets. Regularly scheduled steamer service soon carried passengers and freight. Since imported commodities such as machinery, food staples, and clothing flowed through Empire City to the farms, homes and industry of the region, it was also the site of the United States Collector of Customs for the Southern Oregon District.

Empire City formally incorporated in 1995, but by the end of the 1990s the city was in decline: the lumber market plunged, mills closed, and in 1906 voters moved the county seat to Coquille. Although little of historic Empire City remains today, the spirit of progress, adventure and opportunity characterized by the once thriving port laid the foundation for the development of southwestern Oregon.