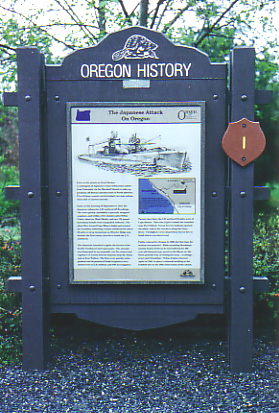 Prior to the attack on Pearl Harbor, a contingent of JapaneseI-Class submarines sailed from Yokosuka via the Marshall Islands to take up positions off Hawaii and the coast of North America. Five of these vessels carried midget two-man submarines and 11 carried aircraft.

Early on the morning of September 9, 1942, the Japanese submarine I-25 surfaced off Brookings. The crew quickly assembled a specially designed seaplane, and within a few minutes pilot Nobuo Fujita, observer Shoji Okuda, and two 170 pound incendiary bombs were catapulted airborne. The plane flew toward Cape Blanco Light and crossed the coastline, following a course southeast for about 50 miles to drop its payload on Wheeler Ridge and become the first enemy aircraft to bomb the US mainland.

The Japanese intended to ignite the forests of the Pacific Northwest and cause panic. The attempt was frustrated by an unusually wet fire season and vigilant U.S. Forest Service lookouts atop Mt. Emily and at Bear Wallow. The fires were quickly extinguished and 50 pounds of bomb fragments were turned over to U.S. Military and FBI Investigators.

Twenty days later the I-25 surfaced 50 miles west of Cape Blanco. This time Fujita crossed the coastline near Port Orford. Forest Service lookouts spotted the plane, and so did ranchers along the Sixes River. Firefighters were dispatched, but not no fire or bomb debris was discovered. Fujita returned to Oregon in 1962, but this time his mission was peaceful. While attending Brookings' annual Azalea Festival, he surrendered his 400 year-old Samurai-type sword to the Mayor as "The finest possible way of closing the story. To pledge peace and friendship." Nobuo Fujita returned again in 1992, to plant a redwood seedling at the bombed site on the 50th anniversary of the attack.