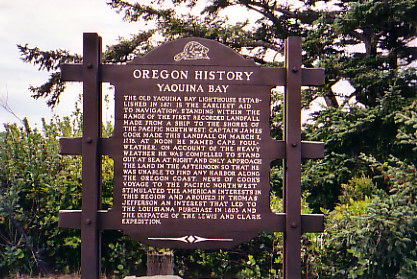 The old Yaquina Bay Lighthouse, established in 1871, is the earliest aid to navigation standing within the range of the first recorded landfall made from a ship to the shores of the Pacific Northwest. Captain James Cook made this landfall on March 7, 1778. At noon he named Cape Foulweather. On account of the heavy weather, he was compelled to stand out at sea at night and only approach the land in the afternoon so that he was unable to find any harbor along the Oregon Coast. News of Cook's voyage to the Pacific Northwest stimulated the American interests in this region and aroused in Thomas Jefferson an interest that led to the Louisiana Purchase in 1803 and the dispatch of the Lewis and Clark Expedition.