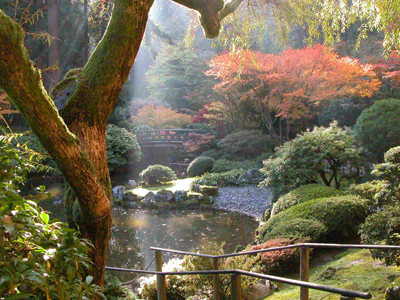 Every time Marilyn Depew walks through the Japanese Garden, she notices something different.

"It really is amazing to be able to walk through the garden for years and years and still make new discoveries," Depew says while walking down the strolling garden's zigzagging bridge. "I think that says a lot for the designer when he envisioned this place."

Depew has been a volunteer tour guide at the Japanese Garden in Portland for many years, showing and explaining the unique garden to everyone from students to seniors.

"The tours are free - unless you have a big group - and people get so much out of them," she says. "I have had people tell me they learn something new each time they visit. You really get a lot out of the garden if you go willing to learn about Japanese culture, art and philosophy."

The 5.5-acre garden is five gardens in one, featuring five different types of authentic Japanese gardens. A trail connects all of the gardens together, revealing their features along its meandering path.

While other communities might have Japanese-themed gardens, Depew says the Portland Japanese Garden is unique. During the 35th anniversary of the garden in 1997, Kunihiko Saito, Japanese Ambassador to the United States, said: "I believe this garden to be the most authentic Japanese garden, including those in Japan."

"I lived in Japan during some of the 1960s and when I came to Portland I was amazed at how authentic it is," she says. "The Japanese Garden designers are very good at hiding and revealing different aspects of the garden. There isn't one place in the garden where you can see the entire thing. You have to walk through and experience the site."

From a flat garden that features white sand and evergreen plantings to the natural garden, which has a stream that flows down the hill symbolizing the journey of life, there are many meanings and lessons to be learned from the different gardens.

"I really feel that people should visit the garden more than once," she says. "Spend some time listening, smelling and just feeling the breeze of the garden. It really does relax and soothe you."

Depew, and her fellow volunteer tour guides take an eight-week training class before giving tours. Some, like Depew, also do research outside of the class to learn more about the symbolism and history of Japanese gardens. Depew says Japanese gardens are based on three elements: stone, plants and water. She also says the garden uses the borrowed scenery from the huge trees framing the garden - something not done in Japan - and the incredible views of the Cascade Mountains on clear days.

"Personally I love the garden during the winter months," Depew says. "You can see how the design works and it isn't as crowded."

The garden is open year round - closed only on Thanksgiving, Christmas and New Year's Day - and is surrounded by many different area parks, gardens, the Oregon Zoo, World Forestry Center and the Portland Children's Museum. Making it just one of the many attractions in Portland's west hills to visit.

"This is a great place to come and learn and slow down," she says. "That's what Japanese gardens are about - finding shelter and peace from the big world."

About the garden: Overlooking Portland like an ancient Japanese emperor's castle, the Japanese Gardens offer five different gardens in it's more than 5-acre space. Take a guided tour or wander through the garden on your own, enjoying the plants, ponds and views.

What to bring: The garden is located on Portland's west hills so comfortable shoes and weather-appropriate attire are a must. Photography is allowed for personal use, but no tripods are allowed without permission. No smoking, pets, food or drinks or cell phones are allowed in the garden.

Getting there: From I-405 (downtown Portland) follow signs for Highway 26 West. Take Highway 26 West and take the Oregon Zoo and Forestry Center Exit. Bear right after the exit and follow signs for the Forestry Center. Continue up the hill past the Forestry Center and make a right onto Kingston Drive. There will be a wood sign for the Japanese Garden and Rose Garden just before the turn. Follow Kingston Drive just under two miles through Washington Park. At the stop sign make a left and just ahead you will see the Japanese Garden parking lot on the left, across the street from tennis courts.

Tips: Give yourself plenty of time when visiting the gardens. Each garden is filled with unique plants, features and symbolism. A quick tour of the gardens takes about 45 minutes - but with a tour guide they can take more than an hour.

If you can, visit the garden more than once, as there is much to see. The garden is outdoors and has many uneven surfaces and wood bridges. Make sure to wear comfortable shoes and weather appropriate clothing.

The garden is on a steep incline, so getting to it on foot takes a small walk up a switchback. People can take a shuttle up to the top, which runs about every 15 minutes from the parking lot - less frequent in the winter months. There is also handicap parking near the entrance at the top of the hill.

History: In 1958, Portland and Sapporo, Japan, became sister cities creating a broader interest in Japanese culture. Several business leaders and the mayor of Portland decided it would be appropriate for Portland to have an authentic, traditional Japanese garden.

On June 4, 1962, the Portland City Council adopted an ordinance to create a Japanese Garden Commission to establish a garden in the site of the former Washington Park Zoo. In 1963 Professor Takuma Tono, head of the Landscape Architecture Department of Tokyo Agricultural University, was commissioned to design and supervise the development of the garden. The garden was open to the public in the summer of 1967.

For more information or to schedule a tour of the Japanese Garden visit their web site at or call them at 503-223-9233.