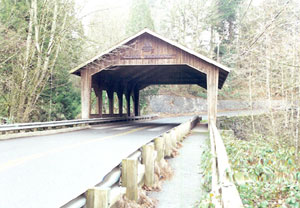 Location:
From I-205 exit Foster Road east. Turn south on SE 134 to Deardorf Road and travel for 1/2 mile. Cedar Crossing is on Deardorf Road over Johnson Creek.

Background:
Although not a true covered bridge as no truss is used for support, Cedar Crossing represents Oregon's commitment to a history rich in covered bridge lore.

Don Clark, former Multnomah County Executive, lobbied for the county to build a covered span. He suggested that the bridge "be over a stream where the foliage is thick and turns to shades of yellow and orange in the autumn and children can peer out windows to see the waters below."

One of Clark's ancestors, who had settled in Multnomah County, helped to promote a bridge across the Willamette. The location for the roofed bridge was found when engineers decided to replace the narrow, deteriorating wooden truss bridge crossing Johnson Creek in southeast Portland.

Work to demolish the old bridge began in November 1981, and soon after, workers cut the stone abutments to accommodate the greater width of the new bridge. The installation of the decking, siding, and roofing was completed within two months.

The span was dedicated in January 1982. After the ribbon cutting was completed and the commemorative plaque unveiled, a parade of vintage cars, horse-drawn buggies and wagons opened the span to public use. Although the day was cold and wet, the ceremony was far from dampened as Clark quipped, "If you ever wonder why they put covers on bridges, this weather will tell you."

The interior of the bridge is finished with knotty pine, and a five-foot walkway separates the pedestrian and bicycle traffic from the 24-foot roadway. Five large windows on each side provide light, ventilation and a place " for children to peer to the waters below."