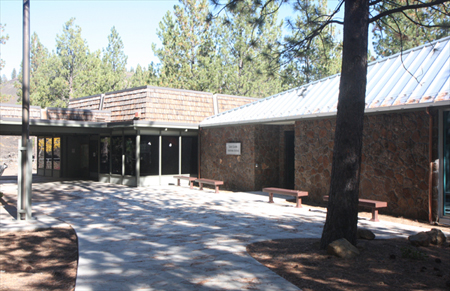 As I stood in the Lava Land Visitor Center, suddenly the Earth science course I took in college finally made sense.

Surrounded by buttes, caves, lava flows and a gaggle of mountains, anyone looking to explore the Newberry National Volcanic Monument should make their first stop the Lava Lands Visitor Center along Highway 97.

The center, which is filled with educational displays, rocks and detailed information about the surrounding area, will give you a great refresher course on geology.

In 2008, a new addition was added to the center in order to add a lobby, reception area, and bookstore. The interpretive themes of the new exhibit hall include local geology, ecology, climate, and culture.

In addition, new hands-on activities will allow younger visitors to explore the bottom of Paulina Lake, test out the weight and buoyancy of our local rocks, examine a molar of a Columbian Mammoth, and experience the sights and sounds of an active volcano.

The exhibit hall was dedicated in memory of Larry Chitwood a former geologist with Deschutes National Forest.

If you want to see examples of what you learn in the center, simply step outside and you can see some of the volcanic examples in real life.

“This really is the gateway to the Caldera,” says Jean Nelson-Dean, public affairs officer for the Deschutes and Ochoco National Forests. “When people come here we can point them to any number of activities, biking, fishing, hiking, cave exploring. There are many things to do and see in the monument.”

If you are going to the Newberry Monument, don’t expect to see a classic huge stratocone volcano. The former peak of the volcano collapsed into itself which presents a less obvious view.  That collapse created the Newberry Caldera, which is home to two spectacular lakes and the youngest lava flow in the state.

“People come to see the Newberry Volcano,” says Scott McBride, Newberry National Volcanic Monument Manager. “Some get confused when they get to Lava Lands by assuming that nearby Lava Butte and its lava flows are the extent of Newberry Volcano; however, Lava Butte, is one of about 400 cinder cones that, in part, make up the massive Newberry volcanic complex.”

But let’s be honest, hands-on learning is the best way to really understand something. At Lava Lands, all you have to do is step out the back of the center to see a landscape that looks more like Modor from JRR Tolkien’s books than Oregon.

The amazing scene is framed by Lava Butte, which stands approximately 500 feet behind the center. The cinder cone is one of 400 that is around the Newberry and has a lava flow that extends 5-miles to the north and west.

The lava flow looks like a jagged rock terrain, much of it like you would see in Hawaii, only cooled and hardened since it flowed more than 6,000 years ago.

All around the lava flow are biking and hiking trails, and there is even a road that goes to the top of Lava Butte, where visitors get amazing views of the Cascades to the west and the main edifice of the Newberry Volcano to the south east.  There is also a working fire look-out station at the top of the butte. It’s a great way to get your bearings before you explore the National Monument.

Also starting at the center are two self guided interpretive trails that can be explored at your own pace.  The Trail of Molten Land meanders over the 7000 year-old lava flow from the Lava Butte. The Trail of the Whispering Pines wanders through a young ponderosa pine forest.

McBride says more trails are in the works and there are a many examples of wildlife including birds, squirrels and deer and elk.

What to bring: If you visit the center, you must take advantage of the trails around the area to explore. Make sure to bring weather appropriate clothing and comfortable shoes.

Tip: Take the time to talk with people at the center to get tips on what other areas of the National Monument to visit. There is a wide range of activities you can do from cave diving, kayaking, fishing, hiking, camping and mountain biking.

Season: The center is open between May and October. During that time hours vary depending on the season, so contact the center for specific hours.

Getting there: The center is clearly marked along Highway 97 about 11 miles south of Bend.