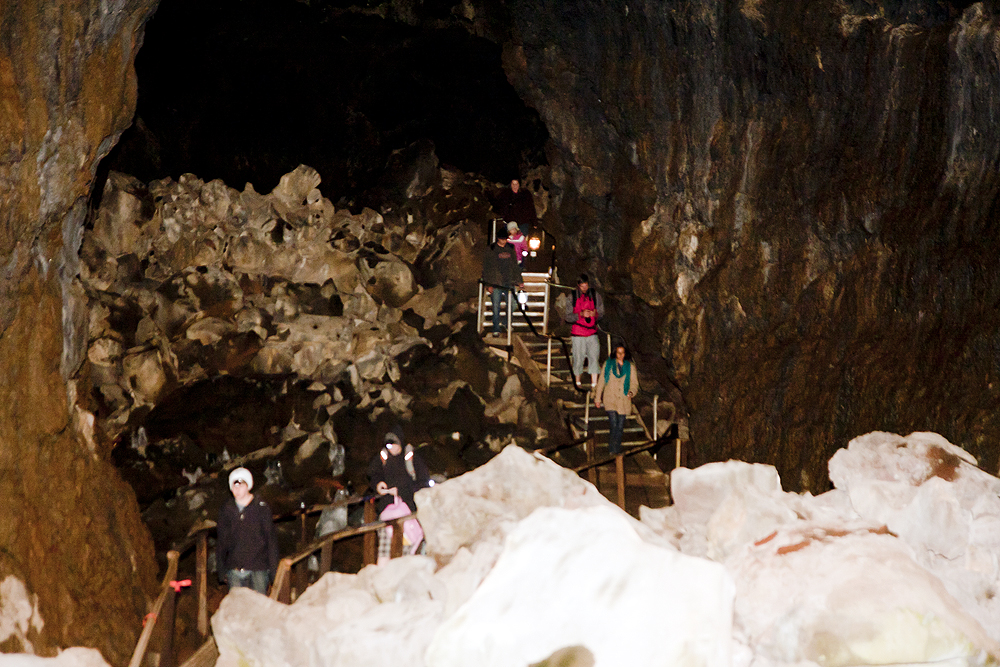 Visiting the Lava River Cave in Central Oregon near Bend is an adventure you must be prepared for, if you want to truly enjoy it and marvel in the natural beauty.

For my visit, I was unprepared.

The Lava River Cave is something that you must see if you are interested at all in the natural beauty that Central Oregon has to offer. For a small entrance fee, you get to explore the longest continuous lava tubes in Oregon.

The cave is located in the Newberry Volcanic Monument which is operated by the U.S. Forest Service. They operate a booth which restricts access to the cave, and also offer interpretive information, classes and lamps for adventurers looking to explore the depths.

My visit to the cave was unplanned. I was driving by and saw the signs and figured I would check it out. I had visions of a cave that you see in the movies, with a smooth floor and stalagmites all over the place, a few bats and light bulbs hanging from the ceiling. No, I wasn’t expecting the Bat Cave level of creature comforts, but I thought it would be a smooth path that would be a pretty easy thing to explore.

I was equipped with the following: A light rain coat, jeans, casual walking shoes, a T-shirt and a flashlight from the trunk of my car, and camera gear. This was totally inadequate for the adventure I was about to take.

The first thing you see when you arrive is a nice parking lot with a toll-booth looking stop. As you walk up to the booth, you suddenly see just how far down the cave is. There is a pretty steep paved walkway, which initially I thought would run through the entirety of the mile-long cave. When you see the entrance to the cave, it is remarkable how big it is. Then you realize, you just finished the easy part.

There are several switchbacks of rock stairs that are very steep, and the minute you enter the cave you immediately notice how cold it is.

The day I visited the cave it was about 80-degrees outside – which is why I was in a T-shirt – but I entered the cave, it was suddenly in the mid-40s. So even if it is warm outside, as it usually is during the summer months in Central Oregon, make sure to wear clothing like it is fall or even winter.

The stairs gave way to a metal grating, that had you pass by ice formations on the floor of the cave, even though it was early June, there were still formations of ice. The cave is huge and with the light coming from the entrance you can still see, however the flashlight was coming in handy.

As I continued to descend, the path got increasingly more difficult. I later learned that this section of the cave is called the “collapse corridor” because during the winter months, the act of freezing and thawing loosen rocks that fall on the floor. This is a very rough section, and while there are hand rails, holding a hand rail, a flashlight and looking for a solid footing can be very treacherous.

The collapse corridor is also the section of the cave where there are no outside sources of light – it is a cave after all.  So whatever light you bring with you, is what you will have when you are down in the cave. I know that’s fairly obvious, but you really don’t realize how pitch black it will be, until you are down there. This section of the cave lasts about 1,000-feet, so while it might feel like you are going to struggle the entire time, don’t worry, this is the hardest section of the cave to navigate. Once you pass it, it gets easier.

The U.S. Forest Service has outlined six more sections of the cave after the collapse corridor, so there are some amazing sites to see if you can make it past the first difficult section. If you have any mobility issues at all, understand that the uneven path, covered with rocks, will be a challenge.

I spend about two hours exploring the cave, and came away with more knowledge about how it was formed and the organisms that live in the cave than I expected. Immediately outside there are interpretive signs that have information about bats and the history of the cave.

About Lava River Cave:  Explore a mile-long lava tube. Lava River Cave offers self-guided exploration of a mile-long lava tube. It takes approximately 1.5 hours to tour the entire cave. Initial access descends 150 stairs to an uneven floor and can be challenging. In the interest of preventing the spread of White-nose Syndrome to bats that reside in the Cave, we ask that you not wear or bring into the cave any clothing or gear you have used in a cave or mine outside of Oregon or Washington. Please wear close-toed shoes and warm clothing. Average temperature in the Cave is 42 degrees Farenheit.

What to bring: What you bring to the cave will dictate what type of experience you have. The essentials are, hiking shoes, warm clothing and a light source. The next time I visit the cave, I will be investing in a head-light. You can find these lights in Bend-area grocery stores amazingly enough, and by strapping a small LED light on your head, it makes the trip much easier. The second thing I would bring,  are some light gloves. Many of the hand rails are made of pipe, and it’s 40-degrees in the cave. So yes, your hands get very cold if you are going to use the rails.

Tip: Give yourself plenty of time and take it easy. It is very steep going in and out of the cave, so be prepared for a workout. If you are out of shape, take it slow and easy, because the cave does go down in elevation quite a bit, and there are a number of stairs. Also, if all you have is a flashlight, rent a lantern from the Forest Service, it will make your trip much more enjoyable. It takes anywhere from an hour and a half to two hours to see the entire cave and it is well worth the effort!

Season:  The cave is open from May to September and closed during the winter months. The busiest time is July and August

Getting there:  From Bend, OR travel south on Highway 97 to Exit 151/Cottonwood Rd. Turn left after exiting and proceed through underpass following signs to Lava River Cave. Cave is about 1 mile down the road on your left.

From La Pine, OR travel north on Highway 97. Take Exit 151/Cottonwood Rd. Turn right after exiting. Continue on road about 1 mile to Lava River Cave on your left. If you miss Exit 151, proceed north to Exit 143 Baker/Knot Rd. and follow southbound directions.