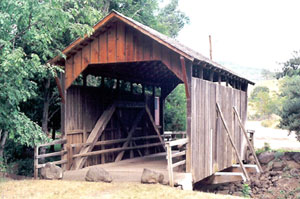 Background:
The Lost Creek Bridge, at 39 feet, is the shortest of all Oregon covered bridges. Since 1979, the structure has been closed to traffic with a concrete span handling the few vehicles each day.

Many Jackson County residents, including Shirley Stone, daughter of pioneer John Walch, claim the Lost Creek Bridge to have been built as early as 1878-1881. If authenticated, this would make it Oregon's oldest standing covered bridge.

Johnny Miller, the builder of the Lost Creek Bridge, also roofed the nearby span at Lake Creek in the 1880s, thus lending credence to a sign nailed on the bridge: LOST CREEK BRIDGE, BUILT ABOUT 1881.

The span may have been partially or totally rebuilt in 1919, hence the official construction date in that year. Features of the bridge include the usual county Queenpost design, a shingle roof and flying buttress braces. The rough wooden flooring consists of diagonal planking, and hand hewn truss members provide structural stability.

A new roof was installed by local residents in 1985. Portal boards were added in 1986, restoring the look of the span in 1920 before accommodations were made for log truck traffic.

The bridge was nearly lost in the 1964 Christmas flood. As swirling waters and heavy debris lashed at its piers, residents and concerned bridge enthusiasts prayed during the night that the bridge would be saved. According to a local newspaper, the skies opened and the water receded as morning came. The journalist questioned, "Was the bridge saved by prayer?"