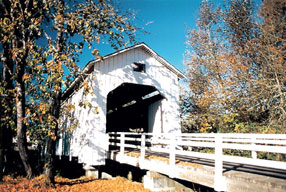 Background:
The original bridge at this location was a 66-foot Howe truss span. In an inspection report in 1917 on the structure, bridge inspector J. W. McArthur noted: "An old bridge. Chords badly worm eaten, Downstream chord has been reinforced in middle by a timber bolted on. Wood is but little better than a powder from worm action. All signs indicate a new bridge in from 2 to 4 years."

Four years later, George W. Breeding erected the present 75-foot Howe span at this site. The cost of the structure was $3,617 and included a 62-foot east approach and a 17-foot west approach.

The span was bypassed in the mid-1970s when the road was realigned, with only pedestrians able to cross the bridge.

Lane County decided to reopen the structure, with November 17, 1986, being a special day for the several dozen people which gathered at the dedication of the renovated span. Present for the dedication ceremony were two granddaughters of James and Salina Parvin who homesteaded in the area during the 1850s.

Several days after the dedication, the approaches were completed and traffic once again used the covered bridge. Repairs to the structure, which included new guardrails and paint, permit a load of 10 tons to pass through the portals.