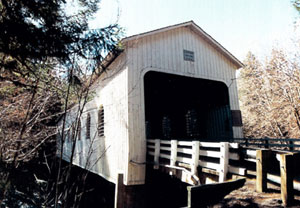 Background:
The Belknap Bridge occupies a site in which a covered bridge has been in continuous use since 1890. The neighboring community recognized the importance of a river crossing at that location and adopted the name "McKenzie Bridge."

In 1911 the first bridge was replaced by Lane County with another covered structure.

The third covered bridge at this site was erected in 1939 and was destroyed by the Christmas Flood of 1964. The current covered span was designed by Oregon Bridge Corporation of Springfield and built by contract let by the county. The bridge was opened in 1966.

Several years later, louvered windows were added to the bridge to give interior illumination and to reduce the "box effect" of the windowless span. Extensive repairs in 1992 and 2002 strengthened the structure, and a new roof was installed.