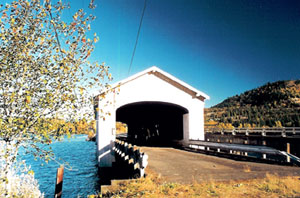 Location:
From Interstate 5 take Highway 58 east to Lowell. Alternately, from Unity follow Jasper-Lowell Road about 3 miles to Highway 58. Lowell is on the south side of Dexter Lake.

Background:
When Amos Hyland settled on the Middle Fork of the Willamette River in 1874, he plotted a small townsite and named it after his birthplace of Lowell, Maine.

Hyland operated a ferry across the Willamette near the present site of the Lowell Bridge until Nels Roney built the first bridge at Lowell in 1907. Roney was paid $6,295 for the 210-foot span.

A truck mishap in the old Lowell Bridge in the early 1940s knocked the truss out of alignment. The Roney-built bridge was replaced at a cost of $25,473 in 1945.

Two years later it was housed. In 1953, the whole bridge was raised six feet and the roadway rebuilt in anticipation of the flooding produced by Dexter Dam. The engineers’ estimates were correct, and water has never risen closer than 2 feet from the bottom of the bridge.

Until 1981, some of the heaviest truck traffic in Oregon passed through the Lowell Bridge. It was closed that year when a modern concrete span was built paralleling the old wooden one. Prior to the closure, a dump truck passing through the bridge with its bed raised extensively damaged the span.

Lane County replaced broken lateral roof braces and portal boards, only to close the structure several weeks later when it was bypassed.

Western Federal Lands Highway Division, Lane County, Oregon Department of Transportation and the United States Forest Service are entering into an agreement to create an interpretive center for the Lowell Covered Bridge. This project will include restoration and rehabilitation of the bridge, as well as creating a parking area with bathrooms, developing interpretive features and signing. The total cost of the project is expected to be $1.2 million.