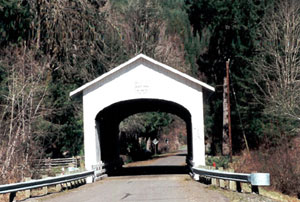 Location:
From Springfield, follow 14th Street in Springfield and travel northeast (as it becomes Marcola Road) to Marcola. At Marcola, turn right (east onto Wendling Road and follow the road to the bridge. Alternately, from Earnest Bridge, follow Paschelke Road about 1.3 miles to Wendling Road. Turn east on Wendling Road to Mile Point 3.5.

Background:
In the 1890s, George Wendling, director of Booth-Kelly Lumber Company, established a post office in the small town which bears his name.

The Wendling Bridge, built just prior to World War II, appears to be hidden on the winding road northeast of Marcola.

Like the nearby Earnest Bridge, the Wendling Bridge showed faded, peeling circus posters pasted on its walls between truss members until time, moisture and visitors removed them.

Lane County spent only $2,241 to build the bridge in 1938. Like many other short span bridges in the county, it used single piece chords for the Howe truss.