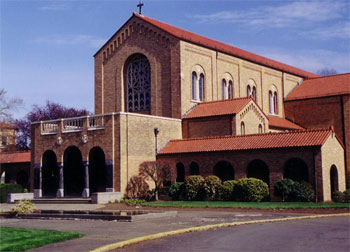 A verse from the Book of Mark states, "Come away to a quiet place by yourself and rest awhile." There is no quieter place to escape the stresses of contemporary life, or to steal some quite time for contemplation and reflection than the Mt. Angel Abbey.

Located about 40 miles south of Portland, the abbey sits on a hilltop above the town of Mt. Angel. The serene setting provides a stunning view of four volcanoes, the foothills of the Cascades, and a great chunk of verdant, Willamette Valley farmland. Wide lawns, sturdy Romanesque brick buildings, grand old trees, and black-robed monks strolling across campus contribute to the site's special ambiance.

The abbey was founded in 1882, by Benedictine monks from the Engelberg Abbey in Switzerland. Fearing religious suppression in their own country, several monks were dispatched to America to seek a place of possible refuge. Their travels took them to Missouri, California, and finally to the young state of Oregon. While life in the Wild West was not always easy, they managed to survive huge debts, internal squabbles, and a series of devastating fires to develop a thriving religious community. Today, the abbey continues preserving the 1500-year monastic tradition of work, prayer, and study. In addition to the 50 or so resident monks, about 150 seminarians are at the abbey training and studying for the priesthood.

People of all faiths are invited to enjoy the Benedictine tradition of hospitality in a visit to the abbey. For those seeking that "quiet place" for some spiritual r&r, the retreat house offers simple rooms for overnight or short term stays. At $60 per day, guests receive three buffet meals, a million dollar view, an escape from television, and the opportunity to participate in the many daily prayer services sung by the monks.

Visitors are invited to use, or at least take a peek at, the abbey's magnificent library. Designed by world-famous Finnish architect, Alvar Aalto, the building features a fan-shaped plan with skylights and rows of high windows. "Even on the gloomiest of Oregon winter days, the room is flooded with bright, natural light," according to the librarian. The collection includes approximately 250,000 volumes with an emphasis on religion, philosophy, and the humanities. All the furniture and fixtures in the library were designed by Aalto, and reflect a modern, Scandinavian sleekness and simplicity.

Also of interest to visitors are two small, but unusual museums. The first, sometimes referred to as the natural history museum, displays a huge collection of stuffed mammals and birds donated to the abbey by an avid wild game hunter. It certainly serves as a testimony to the art of taxidermy. Other exhibits, displayed on a rotating basis, feature small collections of odds and ends ranging from glass paperweights to pink coral formations, all donated to the monks for safekeeping. Sadly, the two-headed calf and world's largest hairball have been rotated out of the current exhibition.

The other museum reflects one monk's keen interest in the "Old Believers," a breakaway sect of the Russian Orthodox church. Choosing to ignore reforms, they continue to practice the older rites and rituals, and lead a more traditional lifestyle. The museum chronicles their troubled history of persecution, first from the Tsars and then the Communists; and their subsequent flight for refuge in such far-flung destinations as China, Tibet, Brazil, and the Willamette Valley. The community of over 10,000 Old Believers living south of Woodburn donated many of the handicrafts, clothing, paintings and icons displayed in the museum.

For the last 30 years, the abbey has presented an annual Bach Festival in late July. On each of three evenings, the event begins with the monks singing Vespers in the Abbey Church, followed by a half hour recital played on the grand organ. Guests then move to the grassy, front lawn to enjoy a picnic supper prepared by the abbey. More concert music in the Damian Center concludes the evening. Unfortunately, festival tickets for this year are long gone, but to be included on next year's list call 503-845-8272.

In the midst of the 21st century, the traditional and simple lifestyle of the monks may seem slightly archaic. Nonetheless, even monasteries maintain websites and you may visit theirs'.