Museum of the Oregon Territory 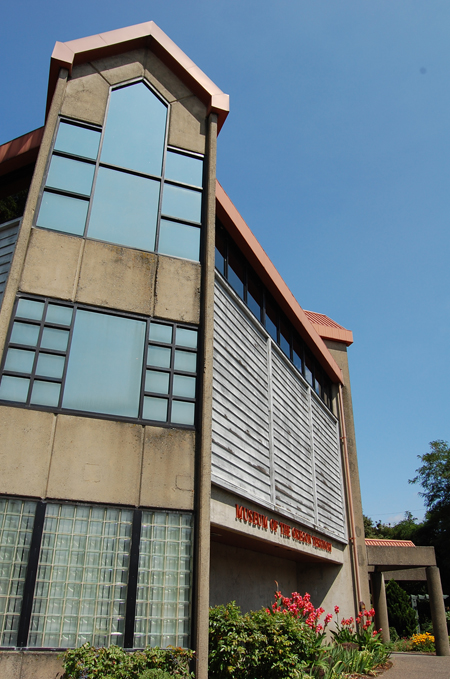 It’s no secret that if you want to learn about Oregon’s history, visiting Oregon City should be your first stop.

With more than a handful of museums, visitor centers and historic places anyone looking for the heritage of Oregon will be well served to visit the city that started it all. While there are many offerings in the Oregon City area, none provide the stunning views, vast collection and knowledgeable volunteers than the Museum of the Oregon Territory.

Perched above the Willamette Falls, the museum is free to visit and run by the Clackamas County Historic Society.

“This is a self-guided museum with 10,000 years of artifacts and displays,” said Roxandra Pennington, marketing director. “We are run mostly by volunteers, and try to offer something different than what you'll find at the End of the Oregon Trail Interpretive Center across town.”

And what they do offer is a glimpse into life before, and after, settlers moved into the area. While there are a few exhibits about settlers arriving, the bulk of the collection focuses on life in Oregon, not on the trail.

The first thing you will see when you go to the second floor gallery, is an extensive collection of tools, arts and other artifacts from the native Americans who lived around the Willamette Falls. Some of the things that captured my attention were they glyphs they carved in stone and near the waterline at the river. The museum has pictures of these carvings which are still out near the river today – some you can only see when the river is running low.

The rest of the displays mainly focus on the building of the city and industry of Oregon City, and the how this now smaller city, became the resting place for plat maps of Oregon City and San Francisco.

“We were the only western city where you could file a Western Donation Land Claim during the Gold Rush,” Pennington said. “So that’s how Oregon City obtained San Francisco's plat map, which is currently on display.”

I will be honest and say my favorite part of the museum is the section about the river. The museum sits above the Willamette River, and from Highway 99E it is very easy to miss if you don’t look up. But its location is amazing.

Viewing the displays on the second floor are like many other museums you will see all around the country. Artifacts, interpretive panels, pictures and the like grace the walls and beg for you to stop and read and imagine what like was like back then.

However, when you turn the corner from learning about the early days of Oregon City, you suddenly are presented with big windows that look out over the falls, and the old mills, power plants and locks that are now sitting along the majestic falls.

Around the window is information about how important the river was to travel and commerce back before the highway system. Models of boats, artifacts from commerce and even large pictures of the power plants that were used in some of the country’s first long-distance transmission of electricity, the falls are more than just great to look at, they have been put to good use.

While there are fascinating exhibits, there is also a fully-functional family history research library, where you can talk with volunteers who will find out if your family has roots on the Oregon Trail. They track the families and have files on each. It’s a great way to connect yourself to the history, especially if you think you have settler roots.

So whether you are visiting to learn about the start of the Oregon territory, or simply want a new vantage point to see the Willamette Falls, the Museum of the Oregon Territory is a wonderful spot to learn, see and discover more about Clackamas County and Oregon City.

About The Museum of the Oregon Territory:  The Museum of the Oregon Territory, opened in 1990, is located in Oregon City, Oregon. Overlooking majestic Willamette Falls, the second largest waterfall by volume in the United States, the museum gives visitors glimpses into life in the Oregon Territory, from prehistoric times through the American settlement in the 19th and 20th centuries. Exhibits in the second floor museum include Native American artifacts, personal belongings of early settlers and the early 1900s Kaegi Pharmacy. Exhibits in the Murdock Gallery change seasonally and reflect different facets of life in Clackamas County.

In addition to the second floor museum, the museum offers resources for genealogical and historic research through our partnership with the Clackamas County Family History Society. Research Library volunteers are available Wednesdays and the first and third Saturdays to assist you with your research.

The Tumwater Room, on the third floor of the museum, is available to rent for your special occasions.

What to bring: The museum is free and inside, so bring a comfortable pair of shoes to wander the exhibits and learn. I also found a notebook is helpful in case you want to take notes on some of the interesting facts, but I am a writing nerd.

Tip: While the museum is free and largely run by volunteers, make sure to make a donation to keep it going strong. In addition, sometimes there are volunteers on staff that will give you a tour. This is a great opportunity to hear the stories instead of having to read everything. Give yourself plenty of time to visit the museum, as it can take over an hour just to speed through everything. The movie about the start of Portland General Electric is nearly 30 minutes long by itself and well worth a watch.

Season:  The museum is open year round.

Getting there:  The museum is located at 211 Tumwater Drive in Oregon City, right off of Hwy 99E (McLoughlin Blvd).