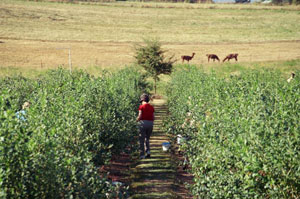 Nodaway Blues Blueberry Farm, a U-pick operation at 24275 S.W. Nodaway Lane on Wilsonville's outskirts, has llamas as neighbors and sits at the end of a lane lined with cherry trees. Most recently in the hands of Paul and Judith Newman, who have owned Nodaway Blues since 2004, the farm is gearing up for another season of blueberry magic.

Nearly three acres of round blueberries -- 2,075 or so bushes -- fill out much of the Nodaway Blues property. While Paul Newman isn't exactly sure how many blueberries that is, he does know the three types of blueberries, out of more than 20 varieties, that make up the 44 rows at his farm: "We have Earliblues, Blueray and Bluecrop."

Earliblues, as the name implies, are the first ready for picking. That is evident by the clusters of large, juicy berries hanging off branches throughout the farm. Newman said many people find Earliblues to be the sweetest.

Following Earliblues are Blueray and Bluecrop, each coming ready for harvest within a week or two of the other. Bluecrop is characterized most by its more defined texture, while Newman describes Blueray as somewhat of a cross between the other two.

"All three have a distinct blueberry taste," said Newman, comparing them with the smaller, less sweet berries that come from Chile during the winter.

Regardless of the type, the little blue balls are full of antioxidants, according to the Oregon Blueberry Commission. Many studies have called blueberries one of the best fruits to put into one's body.

At Nodaway Blues, more than 90 percent of the crop is dedicated to U-pick. The Newmans plan to charge $1.25 a pound this year. They'll have a few half-flats and full flats ready for those not wanting to roll up their sleeves.

Speaking of rolling up one's sleeves, what is the proper way to pick a blueberry?

"You put your hand underneath the clump," Paul Newman said as he demonstrated. "You then use your thumbs to gently roll off the berries. If your thumb can't roll it off, it's not ready yet."

To get the best blueberries possible, the Newmans follow as many sustainable farming practices as they can. No chemicals are sprayed on the plants after they bud. All of the fertilization is ground-based. The result is a blueberry that can be eaten right off the bush. 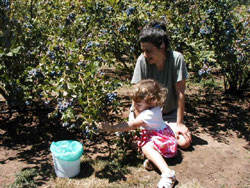 With all the people who pass through Nodaway Blues, the bushes are picked fairly quickly some days. One man last year picked around 260 pounds of blueberries over three days. He said he planned to freeze them and eat them throughout the year.

It's mostly the children, though, gleefully running among the bushes, who leave lasting memories.