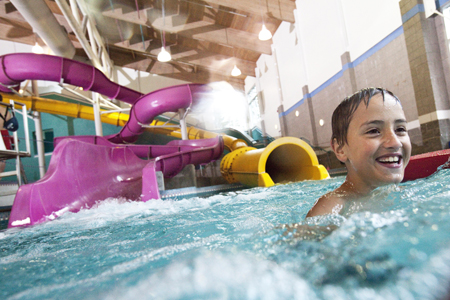 He shot down the 48-foot waterslide like a torpedo, letting out a scream the minute he hit the water at the end of the ride.

“There’s a lot for people to do here, it’s easy to spend an entire afternoon swimming, diving, sliding or climbing,” said Jason Kemmerich, supervisor of the aquatic park. “This really is the only water park of its type in the Portland Metro area, so we get a lot of visitors.”

The park is housed in a 45,400 square foot building and has six pools ranging from a lap pool, dive well, splash down and a kiddie pool.

The unique aspect of the aquatic park is the wave pool – you don’t have to brave the chilly water of the Oregon Coast to catch some fun waves. The indoor pool, which goes from zero to seven feet deep, is kept at a warm 86 degrees. The pool creates rolling waves that visitors can float on, and during any given day, you can see many people, young and old, floating up on and down on inter-tubes, or just standing and floating to the edge of the pool. It’s a great way to enjoy playing in the waves, without the rain, wind and hypothermia of the Oregon coast – especially in the Fall and Winter months.

“It is a very popular attraction and no one else has one in the area,” Kemmerich said. “People who don’t realize it’s here get really excited when they see it for the first time. It’s a very cool thing to have indoors and heated. I would say it’s one of our most popular attractions.”

Around the wave pool, three water slides more than 48-feet tall snake their way around and into another pool. Some steps take people to the top, then you wait your turn and slide down. Depending on how fast you want to go, you can take a leisurely trip down the slide, or point your toes and come down like a torpedo.

Kemmerich said that approximately 250,000 people visit the aquatic park annually. There are large areas where you can watch the kids play in the water, if you aren’t in the mood to jump in yourself. In addition there is also a snack bar, with healthy snacks as well as the normal snack faire, from pizza to sandwiches to salads. There are three eating areas where at two of which you can sit and watch the pool while you eat.

Other amenities include four family changing rooms, which is nice if you don’t want your spouse having to deal with all the kids, both men and women locker rooms, outside sand volley ball court and sundeck.

The newest attraction is a 29.5 foot climbing rock wall, indoors near the pools. Safety harnesses make sure no one takes a tumble, and makes it very nice to come down if you make it to the top.

“A lot of people are also enjoying that new attraction,” Kemmerich said.

So if you want to swim a few laps, practice your diving, shoot down a water slide or wallow in the waves, the North Clackamas Aquatic Park is a nice place to visit if you are looking for an afternoon of fun.

What to bring: It’s a water park, so if you want to get wet, bring a swim suit, towel, goggles and any other accessories you want to swim with. Intertubes are available for rent, and there is also an area for parents to sit and watch their kids. The indoor pool is tricky for photography, so you may want to leave your valuables at home.

Season: The park is open year-round, but the hours do change depending on the season.

Getting there: The aquatic park is located at 7300 SE Harmony Road in Milwaukie off of 82nd Avenue.

Tips: Of course you want to bring a swim suit, but also make sure to bring a towel. The park does have locking lockers.