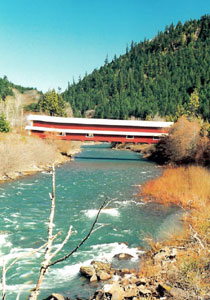 Location:
From Interstate 5 take Highway 58 east towards Oakridge. Just before entering Oakridge, near milepost 31, turn west onto Westridge Ave. Continue to Westfir on County Road 6128. Travel about 2.5 miles to the mill site, community and bridge.

Background:
The Office Covered Bridge was built in 1944 by the Westfir Lumber Company and spans the North Fork of the Middle Fork of the Willamette River, once the site of a mill pond at the town of Westfir.

The wooden span was constructed for logging trucks and connected a lumber mill and its office; hence its name.

The Office Bridge is Oregon’s longest covered span at 180 feet.

The company-owned town, including the bridge, were sold to an investment company in 1977. In the early 1980s the mill burned and the bridge was closed to traffic.

In 1992 the bridge became the property of Lane County through tax foreclosure. Extensive repair work in 1992 stabilized the bridge condition, and in 2002, a new roof was added.

A distinctive feature of the span is the covered walkway separate from the roadway. Because the bridge was built for carrying loaded log trucks, the truss members are gigantic with multiple tension rods and compound chord members. The house has horizontal shiplap siding.